Raiders Fire Gruden for Comments ... Made 10 Years Ago?

Last night, Jon Gruden saw his tenure as the Las Vegas Raiders head coach come to an end – because of comments he made 10 years ago. 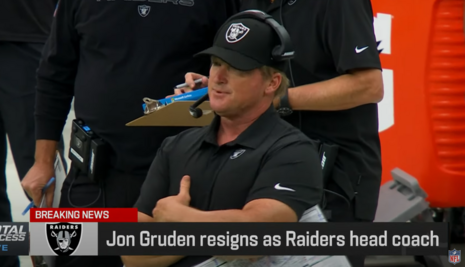 The New York Times published a report that revealed a series of emails containing comments where Gruden used gay slurs and potentially racist comments to voice his frustration at executives, coaches, and things that were happening in the NFL from 2011 onward. One comment that was potentially seen as racist when he said that the Executive Director of the NFLPA, DeMaurice Smith, had “lips the size of Michelin tires.”

Let me be clear: Gruden should not have said any of these things. If you read the report, you will see that he did use language that was unwholesome and made comments that a guy who is in a position of authority should not be saying.

But firing him for saying these seven years ago? That’s absolutely absurd. It wasn’t like he was saying these things to the press after each game, completely losing his temper and lashing out irrationally.

The most frustrating part of situations like this is that the person that was accused of saying racist things isn’t given a second chance to better himself. It’s a one-strike policy, with the scary part being they could dig up your past to invent a strike that gets you out.

What’s worse, the NFL has an inconsistent and confusing standard for league personnel when they violate behavior policies.

Right now, Richard Sherman is playing cornerback from the Tampa Bay Buccaneers and collecting a weekly check from the NFL. However, earlier this summer, he was arrested on the charge of burglary domestic violence after trying to forcibly gain entrance into his girlfriend’s parents’ house in Washington state.

Additionally, Kansas City Chiefs wide receiver Josh Gordon has been one of the most habitual drug policy offenders over the past decade. As of March, he had been suspended five times by the NFL for possessing illegal substances. While he has served his suspensions, he has still been given plenty of chances to play football.

So what gives? What is the NFL’s logic? If saying something crass or inappropriate a decade ago is a fireable offense, then you would not be able to find one player or coach who should have a job today. Football is a rough sport played and coached by rough individuals, so there should be at least a better understanding of what to expect from your personnel when they speak.

And if the NFL fires them for things like that, then there should be no grace given to domestic offenders and substance abusers. It’s that simple.