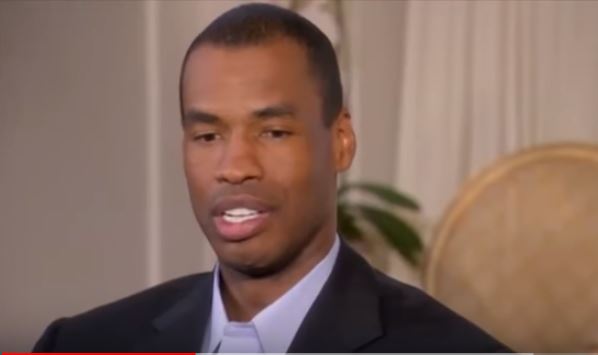 What the world needs now ... are more male homosexual professional athletes. It's been five years since Jason Collins (in photograph) retired from the NBA and then came out of the closet, but there have been next to none from men's pro team sports since then, laments a disappointed Jim Buzinski, writer for SBNation and co-founder of OutSports.

A scorer of less than four points per game, Collins attracted little attention in his 12 years of NBA bench-warming. But when he retired and announced his sexual orientation back in 2013, he went straight to the LGBT "hall of fame." It appeared to Buzinski "as if the sports world — especially in pro male sports leagues — was about to undergo a seismic change in regards to LGBT athletes."

This was the time when Barack Obama, sports commissioners and NBA coaches dropped everything they were doing and told us they were so proud of Jason. CBS Evening News made Collins its lead story on April 29, 2013. Oprah booked the instant hero. Carmelo Anthony had just won the NBA scoring championship and he didn't get near the publicity that was lavished upon Collins from the left-stream media.

Also around that same time, Major League Soccer (MLS) had the openly homosexual player in Robbie Rogers, and Britney Griner of the WNBA came out as lesbian (yawn; that's not news in that league). Michael Sam's "amazing" story would follow a year later. Buzinski writes, "There was so much LGBT news in sports that a New York Times reporter told me it was becoming an old story and was close to being played out. This assumption has proved to be wrong."

"Collins’ coming out turned out to be less a herald than an anomaly," Buzinski bemoans. Collins became "a great advocate for LGBT equality in sports and proved to be a role model for young athletes. ... Collins is a pioneer who is still making a difference." But Buzinski's idea of progress has not materialized:

"Yet we are no closer to having a critical mass of out male pro athletes than we were before he came out. There are several out WNBA players and women have long been the trailblazers in sports, but for historic and sociological reasons we have long written about, gay female athletes don’t get the attention they deserve. In contrast, an out man in the NFL, NBA, NHL or MLB is still the white whale everyone is pursuing."

Buzinski says he had been making predictions when the next homosexual athlete in a team sport would come on out, but he's stopped doing that because no one in the NFL, NBA, NHL, MLB and MLS has done it since Sam played in a single NFL exhibition season. This might have something to do with the fact that less than two percent of American males are homosexual and only the elite athletes play at the major league level in any sport.

Nevertheless, Buzinski is convinced that homosexuals exist in the men's pro leagues; they're just staying in the closet. He thought that if one athlete came out it would lead others to do the same. On one hand he writes coming out "is fraught with emotion, worry and uncertainty" and adds "an extra layer of being a pro athlete." An out jock would be subject to more media attention, but it would be positive coverage, writes Buzinski, defeating his own argument.

"There simply is no predicting when the next big-time pro male athlete will come out," writes a dejected Buzinski. ... "I don’t hold out much hope that we will see an out pro male athlete anytime soon, and if it does happen, it’ll be pretty random." Snagging just one closet jumper, even a backup quarterback holding a clipboard ... somebody ... would turn Buzinski's night into day!

Short of a parade of athletes sprinting out of the closet, Buzinski is claiming consolation prizes. All the major sports leagues include sexual orientation in their nondiscrimination policies and office staff from several leagues march in LGBT Pride parades! And there's more! Half the Major League Baseball scheduled pride nights, and every NHL team had a pride game this year!

Also, the sexual confusion of high school and college athletes is encouraging to Buzinski. He's really psyched about two homosexual college football players—Kansas State’s Scott Frantz and Arizona’s My-King Johnson. They'll both be eligible for the NFL draft in a couple or more years! "If either of them are good enough to be drafted, their sexual orientation will have been known years before a team would take them, minimizing the public attention on them being out. It’s the organic way for a pro athlete to come out."

Buzinski was also encouraged by the Winter Olympics, when homosexuals Gus Kenworthy and Adam Rippon "showed that society is becoming much more accepting of elite athletes being gay. This trend will continue at the Olympics and I hope that future generations will make it a reality in pro team sports. Until then, happy anniversary, Jason Collins."