President Joe Biden’s first speech to a joint session of Congress on April 28 was completely devoid of substance, and filled with cheap platitudes intended to get slow-witted Americans to consent to less freedom and even bigger government. Of course, Hollywood loved the hell out of it. 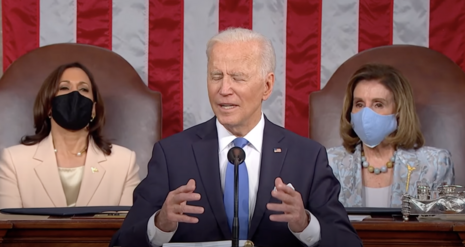 These entertainers are as shallow and mendacious as they come. The liar-in-chief is a man after their own hearts. Actors like Jeffrey Wright, Alyssa Milano, and Rob Reiner turned on the melodrama in response to Biden’s boring, but radical, speech from Wednesday night. They claimed to be “proud” of Biden and expressed relief that we finally have a president who “cares about us.”

One even mentioned that they were “ugly crying” because they were so happy he was president. These people need to get lives.

When Harry Met Sally director Rob Reiner fell in love with Biden’s speech, apparently. He asked his 1.4 million Twitter followers, “How proud are we to have a President who cares about all of US?” Yeah, Reiner’s a real sucker for empty words from Democrat windbags. But really it’s obvious that Reiner is pumping up the praise for Biden to stick to a certain former president he’s really obsessed with.

How proud are we to have a President who cares about all of US?

And who better to kiss up to powerful Democrats than hysterical Hollywood lefty Alyssa Milano? The Charmed actress tweeted out a video of Biden greeting Vice President Kamala Harris before his speech with this caption:

Ugly crying? Really? If Alyssa ugly cries at Joe Biden and Kamala Harris leading the nation, how hysterical does she get at weddings, or upon meeting her children for the first time? She’s a serious drama queen to say the least.

While watching the speech, Westworld actor Jeffrey Wright tweeted his “prediction” that Joe Biden will go down as one of the “great American presidents.” Oh man, these people hated Trump so much that anyone who isn’t Trump is some divine figure.

Joe Biden will be remembered as one of the great American presidents. Not an assertion but a prediction. The times are calling him and require it. He'll stutter here & there. Who doesn't? But he's answering the phone pragmatically. (And I wasn't with him until he won the nom.)

Sure, Biden taking credit for Trump’s COVID vaccine and the subsequent economic recovery is him rising to the occasion, as is him using the speech to spread lies about “systemic racism”  and promote policies geared only toward the radicals in his party. Yeah, sure. And we guess Biden also waving around a blank check for any kind of infrastructure Dems want is “pragmatic,” too.

The emperor’s stark naked, but his Hollywood friends are more than willing to pretend the exact opposite.