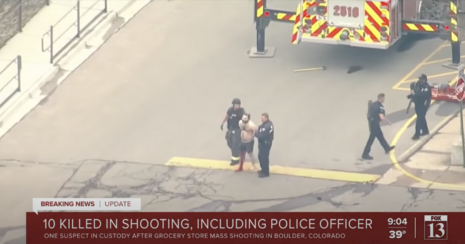 The media is just chomping at the bit all the time to blame pro-gun conservatives – who they love referring to as “white supremacists” – for the mass shootings in America. They get so overexcited about the notion, they tweet before they get the facts.

Case in point: immediately after a tragic mass shooting in Boulder, Colorado on Monday, several Twitter-verified media members rushed to put the blame on “violent white men." Too bad only hours later it was revealed that the shooter was a Syrian Muslim named Ahmad Al Aliwi Al-Issa. This would put him squarely in the social justice warriors' "person of color" category.

They don’t even wait for the facts, anymore.

Conservative social media influencer Caleb Hull rounded up many of the tweets from media people who assumed white racist intent by the Colorado grocery store shooter. On March 23, Hull took screenshots of the embarrassing tweets, many of which he saved before they were deleted, and strung them all together in a viral Twitter thread. Having them all together in one place really showed how willing these mainstream media personalities were to spin a tragedy for political gain.

Several consequential journalists, authors, and other people ended up with their feet in their mouths over the tragedy. The first one on Hull’s list was Deadspin editor Julie DiCaro. On the day of the shooting, DiCaro tweeted, “Extremely tired of people’s lives depending on whether a white man with an AR is having a good day or not.” Oopsie, Ms. DiCaro.

Feminist author Amy Siskind fell into the trap, tweeting that the shooter was “almost certainly a white man (again)” because he was “taken into custody,” and “if he were black and brown he would be dead.” Oh, well, isn’t that a nice generalization in and of itself?

Hull caught TV screenwriter and music video director Dylan Park tweeting that “a white man walked into a grocery store in Boulder, killed 10 people, and was apprehended by police and walked out of the building completely unharmed.” He then mentioned an African American named Elijah McClain – who allegedly died by police brutality in 2019 – to demonstrate how there are “two Americas” when it comes to treatment of white and black criminals. Again, too bad Al-Issa wasn’t what he thought.

Global Correspondent for the Byline Times CJ Werleman was added to the thread for tweeting, “The suspected gunman in the Boulder, Colorado mass shooting is a white guy! Seven reported dead.” The journalist also declared that the shooter is a “white domestic terrorist.”

The lengthy list included the niece of Vice President Harris, Meena Harris. The children’s book author tweeted, “The Atlanta shooting was not even a week ago. Violent white men are the greatest terror threat to our country.” Wow, that’s one way to be really wrong. And it's safe to assume she'd never tweet about a "violent Syrian immigrant" being a "terror threat."

The rest of Hull’s thread included racist blunders from John Pavlovitz, Jared Yates Sexton, and Michael Harriot, among others who declared this the work of evil “white men.” Will any of these tweets get any of these folks, cancelled?