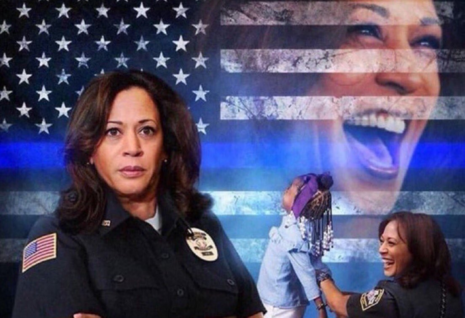 After the left-wing candidate was announced as Biden’s running mate, famous Hollywood fools went into ecstasy. Though, after all, how could any of them brave giving a less-than-enthusiastic, much less, critical response to a woman of color VP nod? Despite the fact that she represents everything gross and totalitarian about the far left, she fits the gender/racial politics profile that party wants.

Thus we get a sensitive lefty man-child like Disney star Josh Gad talking about tears of “joy” at the announcement. The Sleeping Beauty actor was that excited about the Kamala Harris news that he actually tweeted, “I am crying with joy!!!!” Ah, yes, Kamala inducing tears of joy. That enthusiasm sure was present during her presidential run.

Trump hater extraordinaire Patton Oswalt provided Kamala with some serious lip service in the wake of the announcement, virtually high-fiving Biden over picking someone that could smash Pence on the debate stage, allegedly. Patton tweeted, “Not cool, Joe. You know Pence can't be alone onstage to debate Harris. Why put that poor, frail flower through all this angst?” Oh right, and we’re sure Tim Kaine felt the same way as Pence calmly waved through his defense of Hillary last cycle.

Star Wars star Mark Hamill made a prediction immediately after the news, tweeting that Kamala will be “The next Vice President of the United States of America.” That’s bold. Remember when Hillary’s staff tweeted, “Happy Birthday to this future president” before she won? Hopefully this is one of those accidents.

Rob Reiner added to his collection of stupid tweets for the week with one saying, “Finally a Presidential ticket that looks like America!!” Oh, that’s interesting. So America looks like a gaffe-prone old man and a progressive, pro-abort San Francisco DA who detests conservatives.

Reiner added, “Now we all go to work to restore the soul of our Nation. VOTE!!!!” Again, what about this radical leftist ticket is restorative of anything?

Actress Kerry Washington provided some hype for the Biden/Harris ticket,  mostly on the grounds of race. The Scandal actress tweeted, “Overwhelmed by this historic moment. @KamalaHarris is the first Black woman & first Asian-American/Indian to be a VP nominee of a major party.” Washington added, “My heart is soaring for all the kids out there who see themselves in her and will dream bigger because of this.”

Though this seems slightly ironic for someone like Washington who supports Black Lives Matter but then tells African American kids they’ll look up to Harris. Harris’ lack of popularity among Democrat voters has been tied to her tough stance on criminal justice.

It’s weird that a lady, who at one time referred to herself as a “top cop,” is being celebrated by Hollywood progressives in this age of BLM and “defund the police.” Frankly, it’s quite hypocritical.