Chick-fil-A CEO Dan Cathy has surveyed the damage done by Black Lives Matter-inspired riots over the past couple weeks and has surmised that the solution to the violence is white Christians repenting of their racism. 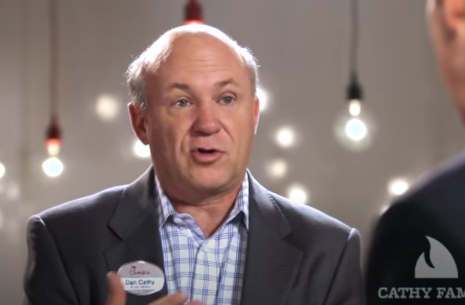 No, there’s no need to condemn violent left-wing organizations that want the death of traditional society and the full dismemberment of law enforcement.

The CEO of once-proud Christian fast food chain Chick-fil-A participated in a roundtable discussion on racism at Passion City Church in Atlanta in the wake of local protests that erupted after the killing of African American man Rayshard Brooks as he resisted arrest from two police officers.

Of course he condemned racism – as we all obviously do – but made problematic sweeping comments about white Christians and their problems with it. He also made the point that the destruction and looting – including the looting of several Chick-fil-A restaurants – may be the fault of white people’s obliviousness to discrimination.

Beginning with his generalizations, Cathy told his roundtable colleagues Louie Giglio, the pastor of Passion City Church, and Christian rapper Lecrae, “Most of us, white people, we're out-of-sight-out-of-mind oblivious to it. We cannot let this moment pass."

Interesting that he would put the sins of a few on the shoulders of millions of “white” Christians who have been told from birth that all people have equal dignity under the law and in God’s eyes. But of course, as Cathy stated, it’s about a “political moment,” a political moment which is currently defined by radical leftist groups like Black Lives Matter and their prodigious lies that whites, particularly racist white police officers, are going out of their way to hurt and/or kill African Americans.

Commenting on damage done to his own restaurant chain in BLM protests, Cathy stated: “My plea would be for the white people, rather than point fingers at that kind of criminal effort, would be to see the level of frustration and exasperation and almost the sense of hopelessness that exists on some of those activists within the African-American community.”

There’s that appeal to a group of people based on color again, and the even more insulting implication that said group of “white people” should be looking to where they themselves went wrong -- not the people who burn businesses, cities, and murder police officers like Capt. David Dorn (ret.). Of course, we are all encouraged to look into our hearts and pluck out hatred, but in this specific circumstance, where Rayshard Brooks was killed after stealing a police officer’s taser, “whites” in general have answer for it?

Still Cathy proceeded with the racial virtue-signalling: “We as Caucasians, until we’re willing to just pick up the baton and fight for our black, African-American brothers and sisters, which they are as one human race, we’re shameful. We’re just adding to it.” He also stated, “Our silence is so huge at this time. We cannot be silent. Somebody has to fight and God has so blessed our city, but it’s shameful how we let things get so out of whack.”

Let us all take the time to remind Cathy that he doesn’t speak for all of us, especially when color is the lens he’s looking through for his judgment calls. He’s adding to the problem.