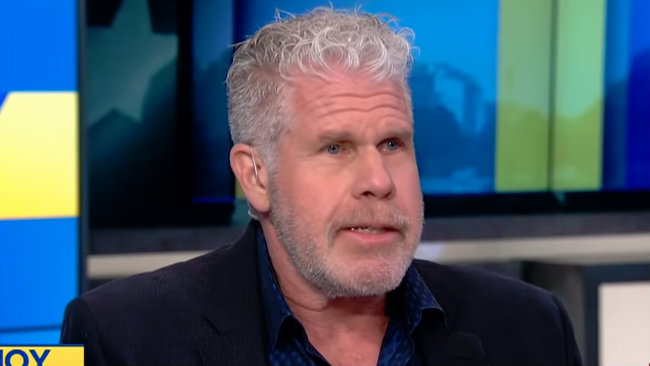 On Thursday the political world went, predictably, into a tailspin at the announcement that President Donald Trump would declare a national emergency over the crisis at the southern border. For progressives this is tantamount to a tyrant finally bending our fragile democracy to his will.

The Hollywood reaction on Twitter was what you’d expect, with revulsion and abject furor dominating lefty social media. Here are several of the worst tweets:

Horror novelist Stephen King stoked the suspense by claiming that Trump’s move is one towards “dictatorship.” He tweeted, “Donald Trump’s purported determination to declare a ‘national emergency’ to build his wall is a giant step away from democracy and a giant step toward dictatorship,” adding that he means to “destroy” our “American form of government.” Sounds real scary, but don’t forget King’s a master at coming up with horror stories.

Fictional badass Ron Perlman was disturbed by the news, tweeting, “Just when ya though the muthafucka couldn’t stink out the joint anymore…” and actor John Cusack, apart from tweeting idolizing posts about Crazy Bernie and moonlighting his roles in John Hughes movies (We get it, you’re a fixture in some 80s nostalgia video online somewhere), tweeted that Trump’s “epic failure & criminality” were the “national emergency.” He followed it with “impeach,” and conservatives everywhere started worrying about their place in the world. Just kidding.

The Wire creator David Simon also skewered Trump via Twitter. Interesting. We thought he’d be completely kicked off the platform by now for his love of “hate speech.” Anyways, the TV producer tweeted that Trump’s declaration is the actual national emergency, telling his followers, “Welcome to American fascism.” 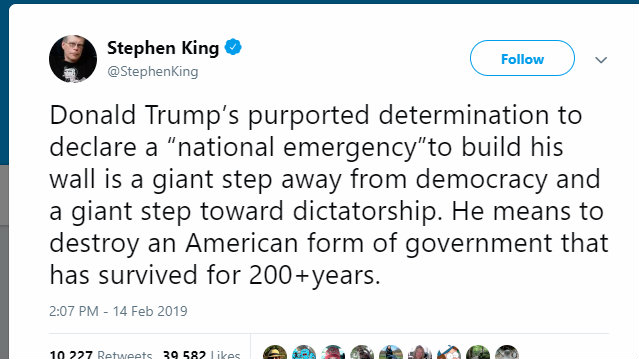 Of course When Harry Met Sally director and alt-left figurehead Rob Reiner yet again had something to say about the president’s actions. (Bad-mouthing conservatives must be in a contract of his somewhere.) Reiner tweeted out another long-winded, self-important paragraph concerning “another sickening example of abuse of power” on the part of Trump. “To declare a national emergency that doesn’t exist, except for the one created by the Pathological Liar, is beyond the height abusive political pandering.” You mean to say if Trump did something wrong, it means he did something wrong?

Wow, what news from Hollywood’s most flaccid demagogue.