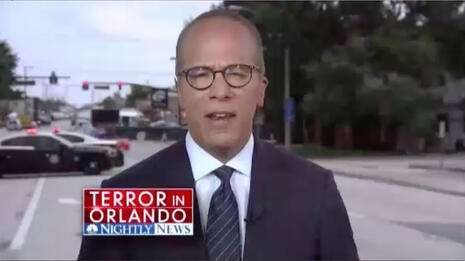 This June was marked by a wave of radical Islamic terrorist attacks – in Turkey, in Orlando, in a Paris suburb, in Israel, and elsewhere around the world. As the bodies piled up and nations were gripped with grief and rage, broadcast networks (ABC, CBS, and NBC) did their best to call the attackers anything other than terrorists.

The Islamic State preached violence during the Muslim holy month of Ramadan, which began in June, wanting to “make it, with God’s permission, a month of pain for infidels everywhere,” according to The New York Times. And ISIS got what it wanted, as Islamists killed well over 200 innocent people in places around the world—as varied as France, Israel, Afghanistan, Somalia, Bangladesh, Turkey and America in the month of June.

But though perpetrators often claimed allegiance to ISIS and ISIS celebrated the slaughter, the ABC, CBS and NBC evening news shows chose to call the terrorists “gunmen,” “shooters,” “attackers,” and basically any word in the thesaurus other than “terrorist,” by a ratio of 5.8 to 1.

In effect, the networks preferred to discuss the tools used in committing a crime rather than the reasoning (such as it is) behind it. Their favorite word was “gunman,” which outdid “terrorist” 2 to 1. Combined with “shooter,” “gunman” made up nearly half (45%) of all references to terrorists in the month of June.

Of the networks, ABC was the worst about identifying terrorist by their gun instead of by their motivation. ABC chose “gunman” or “shooter” 3.6 times more than “terrorist” or “terror group.” That’s compared to NBC, which was the least bad network in this respect, giving gun-related terms a 2.6-to-1 advantage over terrorist-related terms.

On the network evening news shows during the bloody early summer, the left’s habit of blaming guns met the media’s discomfort with holding radical Islam accountable for its violence. In that way, they obfuscated the truth about terrorists and did a disservice to their audience.

Ramadan, said the Times, “has historically been a time when both Al Qaeda and now the Islamic State have escalated attacks.” “The majority of the attacks [during Ramadan] were claimed or inspired by the Islamic State,” reported one USAToday article.

Major terrorist attacks this past Ramadan included the murder of 44 people by ISIS terrorists at Istanbul’s Ataturk Airport, the slaying of 42 people by the same group in Yemen, the killing of 52 people by Boko Haram in Cameroon, and the fatal shooting of 49 people by the radical Islamic terrorist Omar Mateen in Orlando, according to one USAToday list. 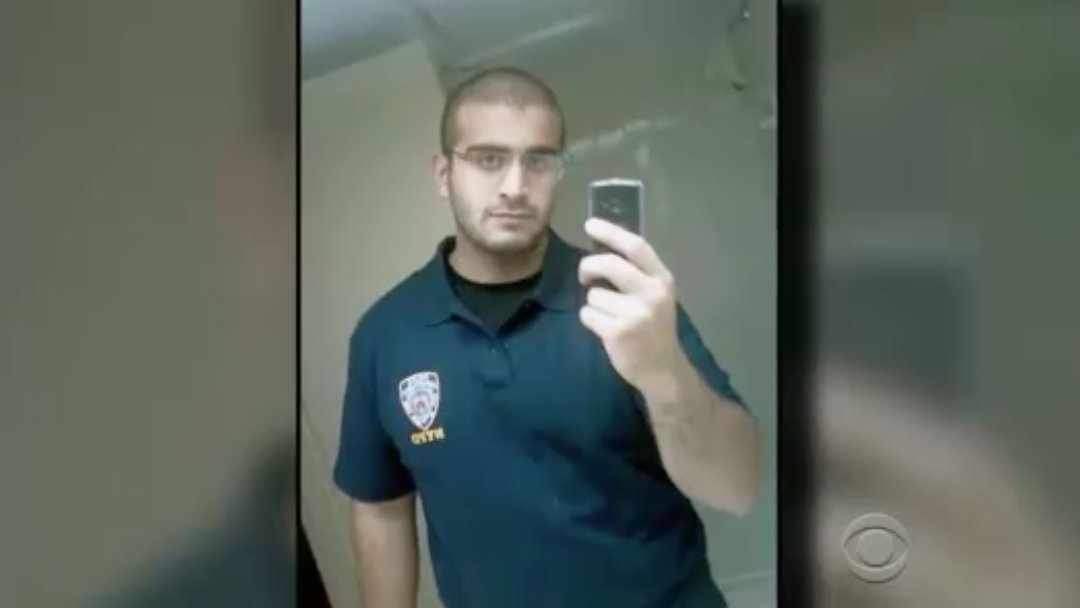 During the massacre at the Pulse gay nightclub in Orlando, Omar Mateen pledged allegiance to the Islamic State, said the Post. The Post article reveals, however, that Mateen’s sympathies were less with a particular Islamic terrorist group than with Islamic terrorism in general. Mateen had expressed or implied support for other, often opposed terrorist groups, including al-Qaeda and Hezbollah. His father, according to CBS, supports the Taliban.

Also in June, Palestinian terrorists disguised as Orthodox Jews murdered four people, ambushing a busy cafe in Tel Aviv. Another terrorist broke into a French police officer’s home, murdering him and his spouse and holding their child hostage. Just before the shooting at the gay nightclub in Orlando, terrorists claiming affiliation to ISIS stabbed a transgendered person in Brussels.

Bias By The Numbers

The statistics are even worse when we only count the references to terrorists made by network employees. Excluding words used by non-employees (such as, Donald Trump) on air, it turns out that the networks used gun-related terms 4.5 times more than terrorist-related terms. More generally, they chose some word other than terrorist by a ratio of 8.4 to 1. 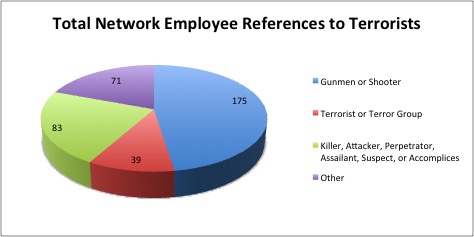 Even ignoring the overwhelming number of times the broadcasts used the words “gunman” and “shooter,” they still squandered plenty of opportunities to use the word “terrorist.” 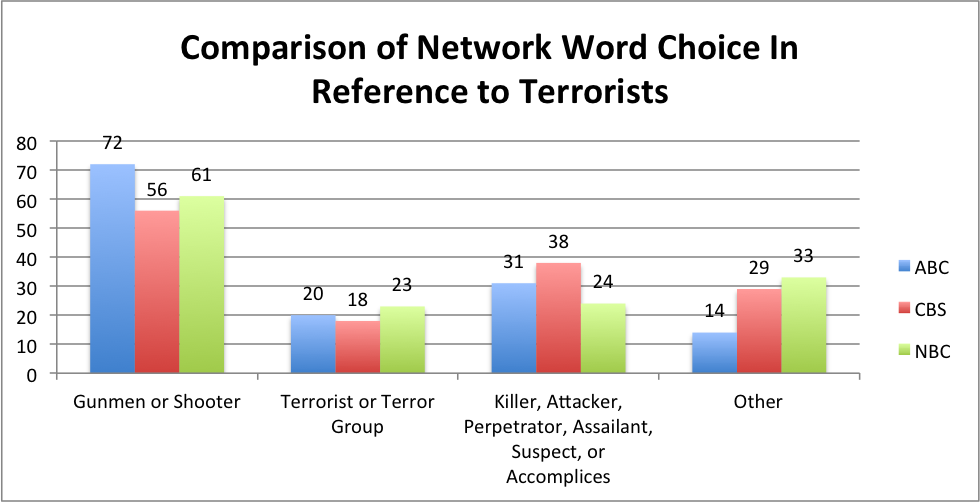 Many of the words used by the networks are largely uninformative. The networks employed the bland words “killer,” “attacker,” “perpetrator,” “assailant,” “suspect,” or “accomplice” 93 times (1.5 times more than terrorist-related terms). So, the networks could have packed more details into their stories by simply replacing these vanilla phrases with the word “terrorist.” Yet, they chose not to do so.

CBS was the biggest offender in this respect. It used these uninformative words 1.5 times more than NBC and 1.2 times more than ABC. With that said, CBS also used gun-related terms the least of all the networks. Even though ABC had four fewer references to terrorists than either CBS or NBC, it named attackers by their guns on 16 more occasions than CBS and 11 more than NBC.

“Shooter.” “Gunman.” Any word other than “terrorist.”

The way the networks told their stories supports the bias in the numbers.

Just after the Orlando terrorist attack, NBC’s Harry Smith reported about Obama’s speech. He, then, echoed Obama’s partisan pivot to gun control in his own reporting.

“The families who are learning that their loved ones have been killed are crippled by grief. Lives forever shattered by one man, his hate and his guns. We have been here too many times before. And with no sign that anything will change, we fear this will not be the last.” (Harry Smith, June 12, 2016)

ABC’s Terry Moran typified the network’s bias by omission, when describing the attack by Palestinian terrorists against an Israeli cafe on June 8.

“Tonight, panic in the streets of Tel Aviv. In the heart of the city, a summer evening shattered by at least two gunmen opening fire on a popular, open-air market lined with restaurants. Here's the moment the shooting started. You see diners leaping from their seats, some hiding, some running for their lives. And this, a police officer coolly taking down one of the gunmen firing steadily at the suspect. Both shooters were ‘neutralized,’ authorities said, and are in custody, one wounded. The toll, at least four dead, several others injured.” (Terry Moran, June 8, 2016)

Without outside knowledge, someone tuning in to ABC for this sound bite would have no idea what the motivation for this attack was. Yet, there was plenty of opportunity to include that information into the segment without making it longer. Simply replace one or two of the four references to the terrorists with the phrase “Palestinian terrorists.”

Covering the same incident, on June 8th, CBS’s Jonathan Vigliotti managed to use the word “gunman” three times, “attacker” twice, and “shooter” once in just six sequential sentences. The last of the sentences identified the terrorists as “Palestinians,” but the reporter went on to say, “At this point we don’t know the exact motive behind the shooting.”

NBC’s Lester Holt gave another example of this sort of uninformative reporting on June 13, this time referring to Omar Mateen.

“The shooter, as you [reporter] noted, raised a lot of red flags over the years for those who came into contact with him, including a former co-worker, who tells NBC News, the shooter had anger issues, and requested a transfer to get away from him. Tonight our Stephanie Gosk talks to a former classmate of the shooter who says he exhibited disturbing behavior as far back as 9/11.” (Lester Holt, June 13, 2016)

The oblique reference to “disturbing behavior” and 9/11 didn’t make up for the fact that Holt put the emphasis on Mateen’s emotions, rather than ideology and used the word “shooter” three times when Holt could more valuably have used the word “terrorist.”

The data in the article was collected from the transcripts of NBC “Nightly News,” ABC “World News,” and CBS “Evening News.” These transcripts were taken from Nexis using the search: “terror or Orlando or extremist or radical or Muslim or Turkey or Israel and Evening News or Nightly News or World News.” In counting the number of references to terrorists, this study excluded names, such as “Omar Mateen,” and pronouns. The word “ISIS,” used as a noun, was also excluded since it was unclear in most cases whether ISIS was referring to terrorists as such or to soldiers or armies. However, when ISIS was used as an adjective to describe terrorists—for example, “ISIS supporter”—it was included.