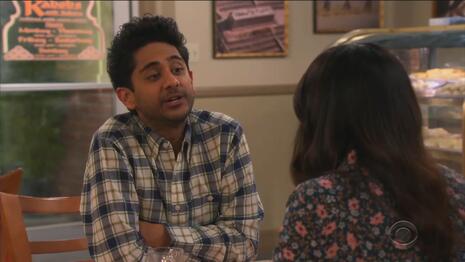 CBS's new series The United States of Al tackled the Afghan conflict this week by introducing an American-hating leftist who blames the United States for everything from the creation of the Taliban to the existence of Osama Bin Laden.

The series is about a former Marine named Riley (Parker Young), who sponsored his Afghan interpreter, Al (Adhir Kalyan), and brought him to the United States to live with him. The show has done a fine job this season of capturing the bonds of brotherhood that exist between U.S. soldiers and their interpreters.

Throughout the season, the Marine's family and the citizens of the Ohio town where Al now lives have welcomed the refugee. In fact, the show has been so positive about the United States and Marines that creator Chuck Lorre received blow-back from the woke crowd.

But this week's episode, "Roht/Sweet Bread," on May 20, introduced a character who spewed an America-hating left-wing point of view about the United States and its soldiers. In the episode, Al falls for a American woman of Afghan descent, Ariana (Azita Ghanizada). Her father immigrated to the United States before she was born. Even though she was born in the U.S. and has no experience of Afghanistan, she nonetheless thinks she is an expert on Afghan/U.S. history. She has clearly gotten her ideas from a leftist, anti-American education (click "expand"):

Ariana: So did you do construction back home?

Al: No, I was an interpreter with the U.S. Marine Corps.

Ariana: You were what?

Ariana: Well, you enjoy your tea.

Al: Ariana, what's wrong? What did I say?

Ariana: Nothing. Congratulations on selling out our country.

Al: Please don't accuse me of something and walk away.

Ariana: How could you help a foreign invader?

Al: Who would you prefer I helped? The Taliban who bomb crowded markets?

Ariana: Of course not.

Al: Then maybe the warlords sitting comfortably in the government, sucking people's blood?

Ariana: Why would you help any of them? The Americans tortured Afghans, raided people's homes, shot innocent farmers.

Al: I'm not condoning that.

Ariana: Almost every monster that Afghanistan faces the American government created. They backed bin Laden, the Taliban, the warlords, and now they're handing the country back to the Taliban and walking away.

Al: Thank you for the history lesson you learned from a book. I was there. Our house was destroyed not once, not twice, but three times.

Ariana: And that's awful, but you made a choice to help them.

Al: Yes, Afghanistan is truly the land of choices. But you will find that out when you go over there and fix everything.

Her dialogue retreads all the tired old lies about the United States "creating" the Taliban and Osama bin Laden. No mention of the Soviet invasion of Afghanistan (communism always gets a pass with the left) or the radical Islamism nurtured on Saudi soil that created bin Laden. Everything evil that ever existed is America's fault to a leftist.

Al talks to Riley and Riley sister, Lizzie (Elizabeth Alderfer), about why Ariana rejected him:

Al: It's because I was an interpreter.

Riley: Oh, she's one of those.

Lizzie: I don't get it. Isn't being an interpreter a good thing?

Al: Not everybody feels that way.

Riley: Everybody that wasn't over there has an opinion, don't they? If she doesn't appreciate what you did, she doesn't deserve you.

Al: Don't say that. It is not so simple.

Riley: It is that simple.

Al: No, it is not. Sometimes life is just complicated and sad. Both of you know that.

Al then returns to the Afghan restaurant where he argued with Ariana to defend his work with the United States:

My whole life, all I knew was war. So when the Americans came, we hoped things would be better. I remember people blasting music at full volume. And I know that that sounds small, but under the Taliban, we weren't even allowed to listen to music. We danced in the streets. There was so much hope. And, no... It didn't last. But some of us thought that if we joined as interpreters, we would be able to help the Americans be more effective. Or less destructive. Was I naive? I was 17. Did things improve the way I hoped? Not even close. But people like me and my family back home now deal with the consequences of that more than anyone else. And I am not ashamed of what I did. Not for a second.

His reference to his family dealing "with the consequences of that more than anyone else" is in regards to U.S. plans to pull out military forces on September 11. The planned pull-out may place interpreters' families at higher risk of retaliation by Taliban loyalists. (The show did a brief post-episode PSA last week for an organization that helps Afghan interpreters who have applied for U.S. asylum. During the PSA, it mentioned the planned pull-out.)

The episode should have defended U.S. soldiers from Ariana's accusations that "Americans tortured Afghans, raided people's homes, shot innocent farmers." She leaves out, for example, the ways in which Taliban terrorists deliberately placed innocents in harm's way.

Nonetheless, the fact that Al did not let her entire anti-American tirade stand unchallenged is unusual for Hollywood.

Since the war in Afghanistan has gone on for two decades, it has received various criticisms from both left and right in regards to military strategy and tactics. But Ariana's rant is indicative of the sort of woke American who thinks they know the nature of the conflict better than the soldiers and interpreters who were there. Her attitude is the height of arrogance and a perfect microcosm of leftism.

This rant was brought to viewers in part by Tremfya, State Farm, and Neutrogena. You can fight back by letting these advertisers know what you think of them sponsoring such content.