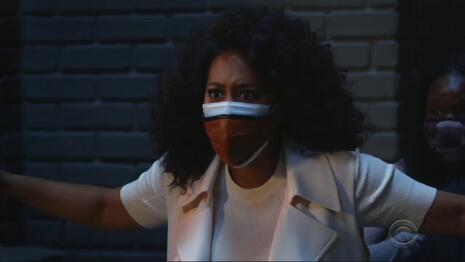 Add to this endless BLM propaganda the second season premiere of CBS's woke legal drama All Rise. This week's episode, "A Change is Gonna Come," on November 16, begins during the summer riots. Dialogue in the courthouse elevator makes clear that one employee's family has already had their store looted and destroyed.

Yet when Judge Lola Carmichael (Simone Missick) stands on the roof of the courthouse with her lawyer friend Mark (Wilson Bethel), she wonders why police wear riot gear as protesters below shout, "Defund the police!"

"I will never understand why riot gear is necessary. They are marching peacefully," Lola says.

"Now, but in an hour, it could devolve into chaos," Mark replies.

"And that's the protestors' fault? I don't condone violence, but riot gear, batons, tear gas...it's a recipe for agitation and indignation," Lola answers.

So, apparently, protesters naturally turn violent if police are wearing riot gear in case of violence? Seeing cops with gear should not make people instinctively want to loot stores and smash windows. Such thinking absolves "peaceful protesters" of personal responsibility.

Lola is black. So, of course, the story line later transitions to her getting wrongfully arrested when she tries to help an innocent black girl who is being bothered by a cop.

Police Officer: How long have you been out here?

Mark: Lo, where are you going?! Get back in here!

Girl: I didn't take anything.

Police Officer: Keep your hands where I can see 'em. -

Police Officer: Stop where you are.

Lola: She is only a child. You can see that she's scared.

Lola: I'm gonna stand here with her and make sure she's okay. You can check.

Girl: He said I was looting, and I wasn't. I was just searching through my backpack for my phone. I can show you.

Lola's friend Mark must convince the hotheaded cop that Lola is really a judge and to let her and the girl go. Add this scene to the umpteenth portrayal this month of a hotheaded white cop mistreating innocent black people.

The show also includes a plotline about a white boy on trial for attacking black and "Latinx" (a term hated by the Latino community) protesters with a baseball bat. Alone in front of American flags in the courtroom, Judge Carmichael's black law clerk argues with her about the boy's presumed guilt. "Sure, those symbols [pointing to the flag and court seal] mean justice and freedom, but not for people like us, not for people like you and me," the clerk says.

This is the poison Hollywood pushes on our culture to sow constant racial division. If a person truly believes there is no "justice and freedom" for "people like us" then what motivation is there to love our country? If cops are inherently racist, then how come eminent black Harvard researcher Roland Fryer found no racial bias in police-involved shootings? If protective gear is considered an incitement to violence, then how do cops protect themselves and how are "protesters" held responsible for their criminal activity?

All Rise does not answer those questions. It just pushes the same toxic agenda as all the left-wing shows that excuse and justify the looting and destruction of cities across the United States.

This rant was brought to viewers in part by Sleep Number and Healthy Choice You can fight back by letting these advertisers know what you think of them sponsoring such content.