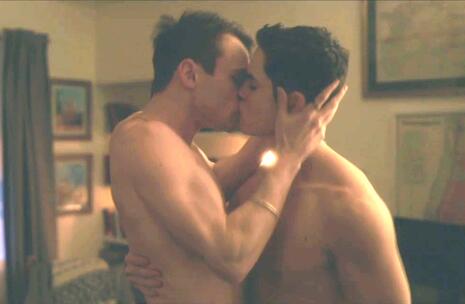 We’re only four episodes into HBO Max’s Gossip Girl reboot and already we have witnessed the graphic sexualization of teenagers, including: a public groping and make out throuple session; two nude, male, teen students making out in a bathhouse to make their nude, gay teacher jealous; and a “rim job” given by a 16-year-old girl to her boyfriend who cheated on her with his male friend (with whom she also cheated). Thanks to episode four, “Fire Walks With Z,” which became available to stream on Thursday, we can now add gay teacher giving into his lust for his male student and having sex with him.

This is supposed to be a show about underage teens for underage teens. But Gossip Girl creator Josh Safran thinks these scenes and storylines are perfectly appropriate and wants to “explore” his underage characters through sex. In fact, he’s quite proud of what he’s produced, telling the self-described “queer” publication them., “My joke is that Gossip Girl is like Gay Slut Summer. I mean, all my friends are talking about it. It's Hot Girl and Gay Slut Summer for everybody. For these kids, it's the same thing — and you want that.” He also says that he’s trying to win over teens and young adults. No, Safran. We don’t want that.

Now that the show is on HBO Max, Safran has much more leeway to produce such lurid material. “It’s always fun to have the guardrails off a little bit, especially on a show like this that deals with some hedonism and sexual exploration and exploration relating to drugs,” Safran told The New York Post earlier this month. Yeah, “fun” wouldn’t be the word I’d use to describe it. More like offensive, disgusting, repugnant and just plain wrong. He went on to discuss the rim job scene, saying, “I don’t think there’s any gratuitous stuff. It doesn’t mean it’s not fun and funny and delicious…” Delicious? What is it with this guy and his wildly inappropriate, creepy choice of adjectives?

One gets the feeling that Safran is creating pornography for himself rather than catering to his audience. This Gossip Girl isn’t for the female or male gaze. It’s for a perverted, gay male gaze, specifically his.

Even the non-sex scenes are extremely outlandish and bizarre. Take this family dinner scene in episode three, “Lies Wide Shut:”

Bisexual Max (Thomas Doherty) is “of age” but still a senior in high school. He’s just as indulgent in drug use as he is with his sex life, bragging about sleeping with everyone he meets. His two dads obviously influenced him as they allow him to sip an alcoholic beverage and joke about giving him a “full-frontal seat” to a play that’s heavy in sex and violence (viewers were later exposed to the show’s first “full-frontal” male nudity scene during the play, which came as a shock to fans).

The only person Max has been unsuccessful at sleeping with is his gay teacher Rafa Caparros (Jason Gotay), despite Max’s repeated attempts, because Rafa won’t sleep with his students. But by the end of episode four, Rafa exclaims “fuck it” and gives in to his lust for Max after he shows up at Rafa’s door because he’s distraught after finding out that his masculine father cheated on his newly feminine father for not being “masc” enough.

Thankfully, Safran has gone too far even for avid Gossip Girl fans with the scene according to The U.S. Sun which reported that fans have slammed it as “disgusting,” and “creepy and predatory.” We couldn’t agree more. Let’s hope this means this will be the only season this reboot gets and that Safran can keep his smut relegated to his private collection instead.