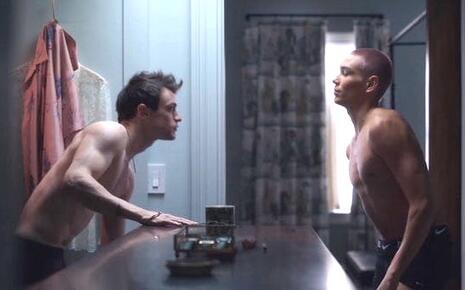 It’s only the second episode of HBO Max’s Gossip Girl reboot, but the show is continuing full steam ahead on depicting inappropriate, sexualization of underage characters for their teen audience. This time, the worst scene takes place at a gay bathhouse where two naked male teens students make out in front of their gay teacher to try to make him jealous so he’ll sleep with one of them.

In Thursday’s episode, “She’s Having a Maybe,” Max (who says he's "of age") follows Rafa into the men’s bathroom at a club and compliments his penis as the two stand at the urinals. Rafa tells him he’s being “wildly inappropriate,” but smiles at the compliment. Rafa rebuffs Max’s advances and firmly tells him that he doesn’t “fuck” his students, to which Max says, “Cool! I’ll top then.” Gross.

Rafa gives him a stern warning and walks away, but Max is still hopeful. Especially when outside of the restroom, he encounters two men who slept with Rafa, one of whom says he “couldn’t walk for days” afterwards and labels Rafa “the fuck of New York.”

When Max finds out that Rafa is at a gay, male bathhouse, he talks Aki into going with him to “cruise” there. Rafa is there naked with a group of guys and walks by Max, ignoring him other than a subtly flirtatious yet warning glance.

Max then decides he wants to make Rafa jealous and asks Aki if he has his consent. There has been flirtation between Max and Aki since the first episode and Aki has been trying to repress his sexual attraction to Max, not wanting to cheat on Audrey or admit he’s not straight. Aki asks, “My consent for what?” Max answers, “Whatever.”

Aki then accepts the excuse of making Rafa jealous to start making out with Max, which Rafa watches from another room. When Aki asks Max, “Did it work?” (meaning, did they make Rafa jealous) Max looks down at Aki’s crotch with a grin and says, “Yeah. Better than I imagined.”

Max and Rafa have a one-on-one discussion later in the episode where Rafa again tells Max that he won’t sleep with him while he’s a student. But he says it will be different once he graduates. Max asks how so, and Rafa whispers something sexual into his ear, leaving Max clearly aroused.

This is the kind of depravity we’d expect from producers who are proud of sexualizing children for a teen audience. And we already know it’s only going to get worse from here.