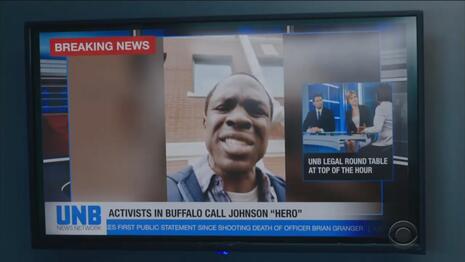 Before the May 4 episode of super producer Dick Wolf's FBI: Most Wanted, “Criminal Justice,” even began, we knew it was going to be yet another Black Lives Matter themed show.

The official episode description read, “When a young man accidentally shoots a cop in self-defense and goes on the run, the team members find themselves in a moral dilemma on the best way to carry out justice.”

In reality, James "JJ" Johnson (Gbenga Akinnagbe) kills Officer Brain Granger (Isaac Beauchamp) while spray painting the officer's car outside his home to say “MURDERER.” While Granger draws his gun to investigate, Johnson jumps at him and the two get into a struggle. Johnson grabs the gun and shoots the cop dead. “I thought he was gonna kill me,” he says before he runs off while the cop dies in his wife’s arms. All this occurs just in the opening.

We quickly find out that the reason Granger was considered a “murderer,” and that Johnson becomes a "hero" for killing him, is because Granger had shot and killed a black man named Nasir Mill during a traffic stop when Mills had gotten out of his car and went to hand his cell phone to his daughter. Because this is TV, Officer Granger was shown to be clearly in the wrong, aggressively and needlessly shooting an unarmed father to death, and then he wasn't charged by the special prosecutor.

Virtually every scene of the episode has racial tinges, with even law enforcement officials disagreeing over Johnson's culpability. There is some speculation and jumping to conclusions about what happened between Granger and Johnson among the FBI team called in to find Johnson before the head agent, Jess LaCroix (Julian McMahon), tells them to “dial it down.”

During the course of the investigation, Agents Kenny Crosby (Kellan Luntz) and Hanna Gibons (Keisha Castle-Hughes) talk to a young woman who had doxxed Granger. The writers were able to insert so many racial complaints into one scene thanks to a young, angry college student activist:

Doxxer: I paid ten bucks and found Granger’s address online. Is that illegal?

Gibson: No, but given the circumstances, you put an officer's life in jeopardy.

Doxer: How about these circumstances? The last time I went downtown, the cops pulled me over. By myself, 2:30 in the morning. Good thing my father gave me and my sisters "The talk" about driving while Black. Did you ever get "The talk"? When you were 13 years old, Mr. White Policeman?

Crosby: Look, there was this overzealous cop in the neighborhood where I grew up. We learned to keep our distance too.

Doxxer: Were you afraid he was gonna kill you? I'm not gonna lose sleep because I doxxed Granger. I feel sorry for his wife, but he was the one who shot Nasir Mills four times in front of his daughter.

Crosby: So all cops are bad. Until you need one, right?

Doxxer: That's not what I said. It's the system that's racist. All over this country, cops have one job: To keep people like me away from people like you. Then they use our Black neighborhoods as profit centers. Write up a bunch of lame-ass citations, jack up fines with interest and penalties. When you don't show up for a court date you don't even know about, there's an arrest warrant out. That harmless little traffic ticket turns into you losing your job. And don't even get me started on mortgage redlining.

Gibson: So better we find James Johnson than the Buffalo PD.

Doxxer: I don't know where he is, and I wouldn't tell you even if I did. I think that guy did something righteous. By the way, the reason why I got pulled over in the middle of the night? My license plate was too dirty. I have to go. I have class.

A theme throughout the episode is that Johnson is “a hero” and “a vigilante.” He’s even trending on Twitter as such, with users saying, “That cop got what he deserved.” A reporter says he’s become “a folk hero” when she’s questioning the head of the FBI. From the teenage couple who become accomplices to Johnson early in the episode, to a younger black man who offers his help unsolicited to Johnson on the bus, he’s considered righteous.

When agents catch up with the young couple, the boy proclaims, "It's not JJ’s fault the system's screwed up. He's a nice guy, so, yeah, we helped him a little." The youths can’t fathom they’re actually being arrested, despite admitting to a crime, with the teen girl protesting, "Everyone's saying he didn't do anything wrong!"

Even some of the agents imply Johnson is justified after learning about someone torching the car of the special prosecutor who declined to charge Granger in the death of Mills. Someone had posted an image, complete with “#JusticeforJJ.”

Crosby: So we got copycats now? Thinking Johnson's a hero?

Ortiz: This reminds me of O.J. Simpson. My pops took me to a bridge over the 405 to watch the chase. Hundreds of people out there. When that white Bronco showed up, people started cheering like he was breaking tackles at USC.

LaCroix: Well, Johnson may be a hero in some quarters, but he's still a fugitive. Our job is to bring him in and let the system do its work.

Ortiz: If Johnson turns himself in, he might have a shot at minimal jail time.

Gibson: I'm with Sheryll. Why should he think he can get a fair shake in Buffalo?

LaCroix: All right, let's stay on point. There's no doubt that Johnson is feeling his power. He set out to make a statement the night that he killed Granger. Now he has an audience and he has a spotlight.

Barnes: Which makes him more likely to up the ante.

La Croix: Eh... Not necessarily. If I'm Johnson, I'm thinking this whole thing's getting worse. I'm tired of running. Maybe we should throw him a lifeline.

Isobel: We're doing everything in our power to bring this to a peaceful resolution, and we're asking for the public's assistance in doing that.

Reporter 1: How do you expect that to happen when Johnson's become a folk hero?

Isobel: I don't agree with that characterization.

Reporter 2: But isn't it true that you have suspects in custody that helped him evade capture?

Isobel: Two teenagers who got in way over their heads. But I would like to make an appeal directly to James Johnson. Mr. Johnson, I do not condone your actions, but there's a long history of officer-involved shootings in this country. No. Let me be blunt here. Homicides perpetrated by a handful of police officers against people of color. That is unacceptable to the Bureau, and it has to stop. I urge you to surrender. Get an attorney and assert your defense in a court of law.

Recall how the episode’s description referred to Johnson as “a young man [who] accidentally shoots a cop in self-defense.” Johnson even said aloud, “I thought he was gonna kill me,” before he leaves Granger to die. Basically he’s a victim. Of the system, of racism, of police brutality, you name it.

But then Johnson releases a video of himself which is broadcast, where he’s singing a much more angry and fired up tune:

LaCroix: Hanna, turn on the news.

Johnson: I'm making this in case something happens to me. First off, I didn't mean to hurt that officer. I--I was just trying to send a message, tag his car, and then the man comes out shooting, and I defended myself. They say I'm a "fugitive from justice." I guess that's true. The same justice that got George Floyd tortured to death by a cop while three other officers stood around and did nothing. Same justice that hunted Walter Scott down and shot him in the back! There's so many names, I can't even remember! Then I saw Nasir Mills, eight blocks from where I live. And when the law did nothing? I knew it was time to wake up. Time to do something. To let all this rage out. I needed to let Nasir's family know that we will never forget what they did to him. Am I sorry for how it went down? I'll let you know when I'm done.

Newcaster: And there you have it. James Johnson--

Barnes: They're saying Johnson's legal team sent it to all the major news outlets.

Johnson also seems a lot less like “a nice guy” when he later shows up to the home of and takes hostage Detective Jerry Solano, who had framed his brother on drug charges which sent him away to prison. Naturally, there are picketers marching around the neighborhood with signs and slogans of “justice” by the time the agents and police officers arrive on the scene for the final showdown.

During the standoff, Agent Barnes, who is black and had earlier admitted to being emotional about the case because “police have been brutalizing my people for 400 years,” gets on the phone with Johnson. She apologizes for the FBI's racial history, "What Hoover did in the '60s was despicable. But we're trying to understand the mistakes of the past and make amends."

In the end, Johnson is reassured the FBI can guarantee his safety and he peacefully surrenders to cheers and chants of "Justice!" Let's just hope this kind of vigilante justice and fugitive hero-worship remains a woke liberal fantasy on TV.

Conservatives Fight Back! Tell FBI: Most Wanted’s advertisers what you think of them sponsoring such a deceptive episode on race and policing: Amazon, Applebee’s, Subaru, and Swiffer, ​with All State being a repeat offender.