Actor Kurt Russell to Hollywood: Shut Up and Act 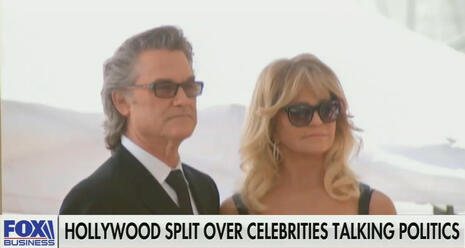 After a week in which a celeb ranted, “Bury Trump in a Nazi graveyard and put a swastika on his grave,” and other actors wanted a new Hollywood blacklist of Trump “enablers,” one leading man was brave enough to say that celebrities should “step away” and not weigh in on politics.

After decades of celebrity tantrums against any Republican in power, how’s that for a refreshing take from Hollywood?

The comments came in a November 18 interview of Kurt Russell along with his longtime girlfriend Goldie Hawn in the New York Times to promote their new Netflix Christmas movie. The couple plays Santa and Mrs. Claus in The Christmas Chronicles: Part 2 which will be released on Wednesday.

During the lengthy exchange, the topic of stars' political advocacy came up.

Speaking of an arena, Kurt, you’ve said in the past that celebrities shouldn’t really weigh in on politics. Do you still feel that way?

RUSSELL Totally. I’ve always been someone who felt we are court jesters. That’s what we do. As far as I’m concerned, you should step away from saying anything so that you can still be seen by the audience in any character. There’s no reason entertainers can’t learn just as much as anybody else about a subject, whatever it is. But I think that what’s sad about it is that they lose their status as a court jester. And I’m a court jester. That’s what I was born to do.

RUSSELL A court jester isn’t always funny. A court jester is the only one who can walk into the castle and put the king down as long as he doesn’t hit too close to home. I think that’s been a big, important part of all cultures throughout history, and I’d like to see it stay in ours.

Russell, who has spoken up for gun rights and described himself as a “hardcore libertarian" in the past, hits on an important point about the court jester, or Shakespearean fool.

Last Thursday I wrote about writer/director Billy Ray seeing Hollywood as patriotic for their partisan political efforts. When he said, “we’ve always told stories that make America examine itself” and “we have celebrated American ideals and castigated America’s failures in a never-ending attempt to make America live up to its promise,” he was describing the traditional court jester role, which stands in stark contrast to celebrities spouting their personal views in their own name.

As Hollywood has gotten ever more outspoken and obvious about its leftist leanings, the moral weight of its societal criticisms in the arts has dampened significantly. Imagine how much more effective a film or TV show that touched on an important public issue would be if its actors and creators were seen as neutral or fair mediators instead of social justice warriors trying to stuff their politics down our throats or trying to educate us ignorant, bigoted rubes.

So much of what TV and film does these days amounts to ham-handed lectures on political correctness instead of art that stirs the soul and inspires empathy and understanding. No wonder audiences are tuning out.

More in Hollywood should follow Russell's advice. Shut up and act.