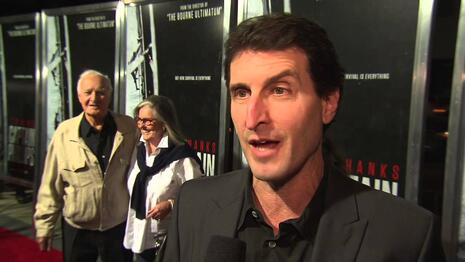 According to one screenwriter, Trump has been saying of Hollywood for years, “We’re the radical left, anti-God; we hate Christmas! A bunch of condescending socialist defund-the-policers,” but the better term to use for them would be “patriots.”

Writing in Variety on November 18, Billy Ray (pictured, right), who wrote, directed and executive produced Showtime’s lying liberal fantasy The Comey Rule, told of how he and others in Hollywood became more politically active in the wake of Trump’s 2016 election, driven by “pure love of country” and “a desperate defense of democracy.”

As he described the story of his own personal heroism:

In early 2017, as I was scraping myself off the floor in the aftermath of Trump’s election, I decided I would never again wake up the morning after an election thinking, “I could have done more.”

So I began to reach out to candidates who were going to be running for the House and Senate in 2018. And I asked some colleagues of mine for help in a new and informal effort.

Step one was lunch (this is Hollywood, after all). I put together a few lunches with promising candidates and invited fellow writers, producers, agents, studio folks. Ten people at a time, then 20, then 30. Then I started holding town halls in venues provided to me for free by the WGA and studio lions like Jim Gianopulos.

Wow, he got plum Hollywood venues for free from the union and studio heads for crowds that grew to 300-400, can you say “privilege”?

He gushed over the donations and non-financial help he got from "friends," marveling that “No one ever said no” and “the answer was always yes, with no one seeking credit,” which led him to melodramatically conclude:

The effort and staggering generosity that I witnessed had nothing to do with ego, or arrogance, or partisanship. This was pure love of country, and a desperate defense of democracy. Turns out, America and its ideals are sacred in Hollywood.

The only ideals that are sacred to Hollywood are leftist ones. This was not simply about getting rid of Trump as some kind of unique evil; if it were, Ray’s work would be done. Instead, he wants full Democrat control of government, as evidenced by him talking about the need to “put a sequel into immediate production” to win the Georgia Senate runoffs. That’s not a non-partisan “desperate defense of democracy,” it’s an aggressive advance of liberalism.

But Ray imagines all this to be part of Hollywood’s heroic legacy as guardians of American ideals.

That’s why we’ve always told stories that make America examine itself. “To Kill a Mockingbird,” Chaplin’s “Modern Times” — think about what “All in the Family” and “Roots” did. Or what “Saving Private Ryan” did for veterans’ causes. Or the countless stories we’ve told to humanize the plight of communities chronically left behind in America.

From “Mr. Smith Goes to Washington” to “All the President’s Men,” from “Norma Rae” to “Platoon” to “Moonlight,” we have celebrated American ideals and castigated America’s failures in a never-ending attempt to make America live up to its promise.

That’s what I saw in those countless town halls and fundraisers and phone banks, and in every request I put out.

To his credit, Ray did call “condescending, virtue signaling, canceling people recklessly just to prove our social-justice-warrior status” “nonsense” and “cowardice” that “will not get us where we need to go.” But he laughably claimed, “That’s why so many of my colleagues put it aside in this effort.” Ah, yes, I do recall a noticeable improvement in Hollywood’s SJW behavior in the weeks and months leading up to the election … not.

But still, Ray will remain forever grateful: “To each of them, all I can say is thank you, and bravo, for your unending display of sacrifice, effort, generosity and fellowship — all driven by a patriotism much of America (and certainly the Republican Party) may never see.”

That’s a fantasy that could only have come out of Hollywood.