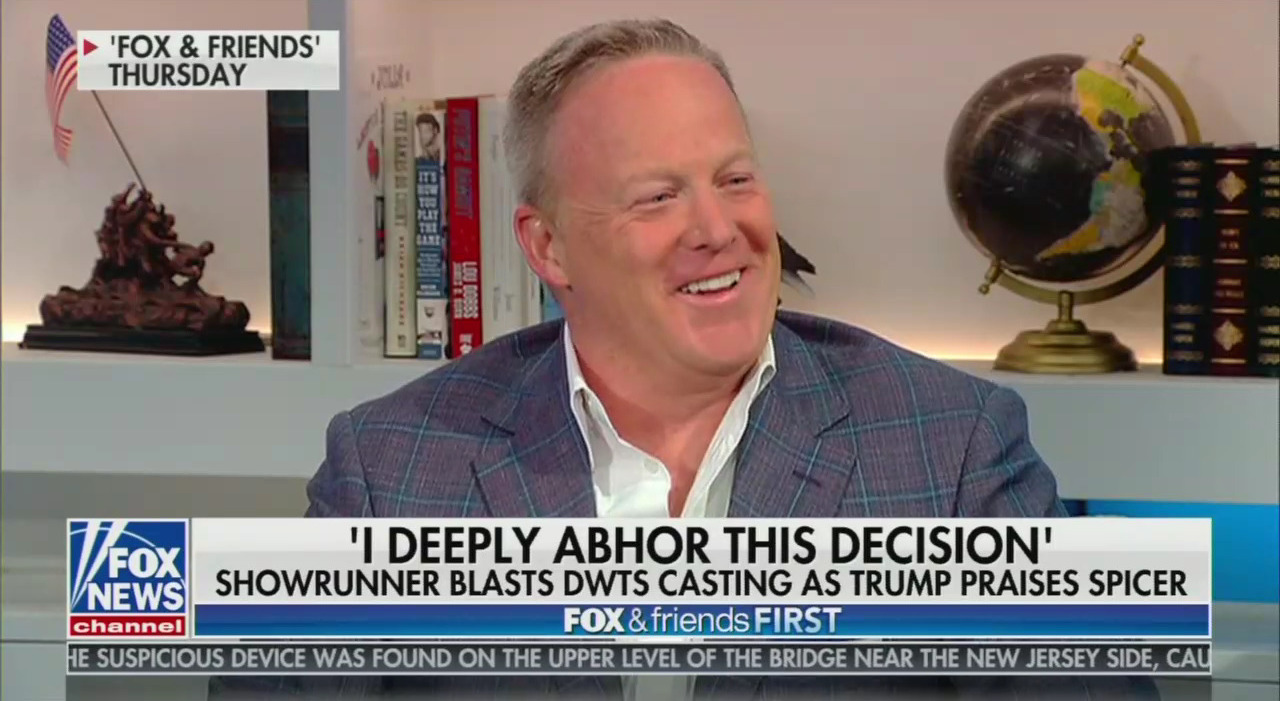 After DWTS co-host Tom Bergeron tweeted a statement that appeared to express his disappointment with Spicer’s casting, Spicer told The Hollywood Reporter he hopes the show will be “a politics-free zone" and said, "My hope is that at the end of the season, Tom looks back on this and realizes what a great example it was of being able to bring people of really diverse backgrounds together to have fun with each other, engage in a real civil and respectful way and maybe show millions of Americans how we can get back to that kind of interaction."

Predictably, there are many unhinged liberals who don’t want to let that happen.

Krista Vernoff, the showrunner for another popular ABC show, Grey’s Anatomy, begged her employer to can Spicer. “I deeply abhor this decision by the company I work for and truly love. This man lied daily, to our faces, and made a mockery of our country. This is not cause for celebration or celebrity. It’s not too late to change this plan. Please,” she tweeted, tagging the Twitter accounts of ABC, DWTS and Disney (which owns ABC) CEO Robert Iger.

Actor Bradley Whitford tweeted, “You enabled a racist, sexual assaulting White Nationalist, @seanspicer. Dancing while children sit in cages, torn from their families because of policies you championed is vile. Why are you doing this @DancingABC? @RobertIger? You cool with banning Muslims? Are Mexicans rapists?”

In a since deleted tweet, Queer Eye star Bobby Berk went berserk, “Everything around us is constantly too political as it is. Shame on you ABC for now making this beloved show political by casting one of the biggest liars who has ever been. It’s called ‘Dancing with the STARS’ and the fact that you’re calling him a star is disgusting.”

Meanwhile, another Queer Eye star, Karamo Brown, who will also appear on this season’s DWTS with Spicer, made the mistake of being conciliatory with his competition. Brown said in an interview with Access that “most people look at us and think we’re polar opposites, but I’m a big believer that if you can talk to someone and meet in the middle, you can learn about each other and help each other both grow. And so, we have been chatting all day today, like he’s a good guy, really sweet guy.”

Feminist author and New York Times contributor Roxane Gay saw the video of Brown’s comments on Spicer and replied reasonably, “Get a fucking grip. There is no friendship with people who enable fascism.” The backlash against Brown for simply being polite to Spicer was so severe that he’s disabled his Twitter account.

Of course, it wasn’t just liberal Hollywood-types who were upset about Spicer’s addition to the new DTWS cast, their allies in the media went on the offensive as well.

An NBC News THINK piece by Kurt Bardella called the move “an embarrassment to ABC and a slap in the face to journalists” and charged, “ABC and ‘Dancing with the Stars’ are helping normalize the very behavior that is undermining the pillars of our democracy.”

Variety, which called the casting a “Terrible, Cynical Ratings Grab,” groused, “Spicer’s previous life as a professional liar should really disqualify him from public life, period.”

Kevin Fallon wrote in The Daily Beast, “I think I skipped class the week of journalism school where they talked about how unapologetically promoting fascism was the most reliable springboard to a media career, but here we are, with the news that the first press secretary of the Trump administration will waltzing across your TV Monday nights this fall,” going on to call the decision to cast Spicer “legitimately shameful” and “particularly vile.”

CNN spoke to sources inside ABC News, some of whom were “up in arms” over the network’s entertainment division’s picks for DWTS. One said, “It’s a slap in the face to those of us who had to deal with his baloney and the consequences of the ongoing lies and disinformation campaign at the White House,” while another complained Spicer was “horrible” to them and said, “It’s disgusting to think he is getting on the show and getting paid by our company.” This, from the network that has George Stephanopoulos, former Clinton White House Communications Director, as a Good Morning America co-host.

DWTS will premiere on Monday, September 16 on ABC.