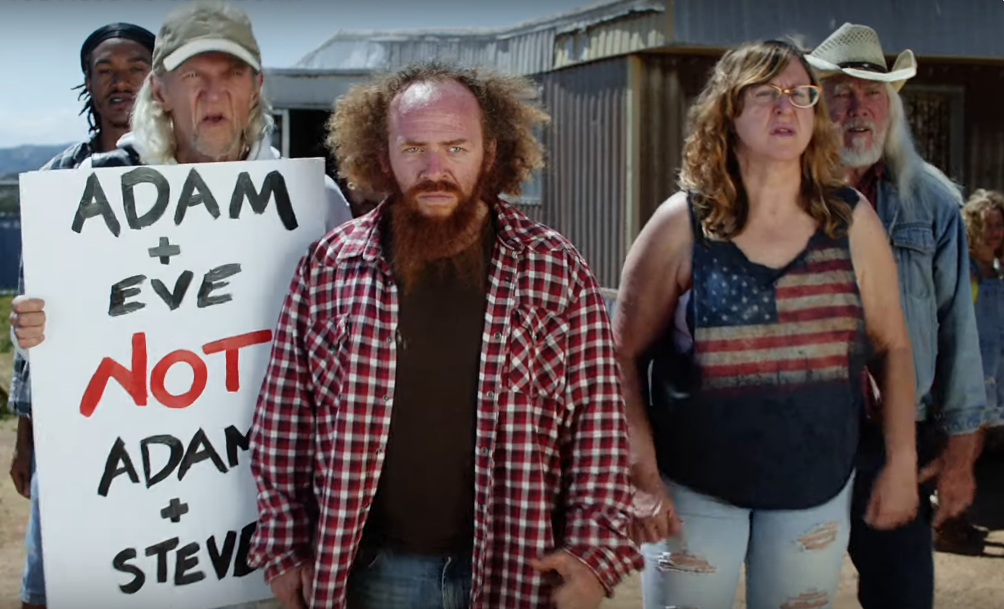 Taylor Swift may have stirred up some “Bad Blood” with social justice warriors for not being sufficiently woke in her new pro-LGBT song.

On Friday the pop star released the lyric video to the single “You Need to Calm Down” and on Monday she released the official music video which appears to take place in a gay, rainbow-themed trailer park and features dozens of (mostly) LGBT celebrity cameos.

Swift even virtue-signals with shots of angry, illiterate, toothless hicks protesting and holding signs that say, “Get A Brain Morans!” and "Homasekualty Is Sin!" She sings to those who don’t support the LGBT agenda:

You are somebody that we don't know
But you're comin' at my friends like a missile
Why are you mad when you could be GLAAD? (You could be GLAAD)
Sunshine on the street at the parade
But you would rather be in the dark ages
Makin' that sign must've taken all night

But not everyone on the left is happy about this new LGBT-friendly pop song timed to come out during Gay Pride Month. Vox called it “a complicated example of Pride Month’s commodification,” Cosmopolitan complained the music video “conforms to plenty of stereotypes about Pride,” and Slate charged that “for many queer people celebrating Pride Month, it feels hopelessly, insultingly out of place.”

Slate went on to blast the “cringeworthy” song as “a Teachable Moment About How Not to Be an Ally.” The article further accused Swift of “queer-baiting fans” with her current rainbow “aesthetic motif” and, even worse, she supposedly got people’s hopes up that she would come out as lesbian because she teased a big announcement to “lesbian news anchor Robin Roberts, then released the first single from Lover on Lesbian Visibility Day.”

Continuing the clap back against “You Need to Calm Down,” Vice called the song “pretty clueless” and claimed, “Filtering serious issues of advocacy through the prism of Swift's bubblegum pop persona minimizes the subject matter.”

Esquire similarly said, “Equating online haters with the personal and societal struggle of LGBTQ+ people is, at best, tone deaf… And such a calculated move to leverage LGBTQ rights into her own image seems gross.”

The Atlantic was also uneasy with the “queasy double message,” saying, “The singer’s pro-gay single strangely compares her struggles with fame to more dangerous kinds of persecution.” According to the piece, “The fear for many queer people is less that allies might profit off them than that allies might change and defang what queerness means.” In other words, no straights allowed.

Another Esquire article called the video “strangely both gay and sexless,” wishing for more overt gay sexuality on screen, but found one thing they liked – the portrayal of the protesters in the video:

This part is the best. If there’s one thing that has been shown to get through to homophobes, it is casting them as ugly and poorly-educated. They take it to heart and it works every single time and it is a shame more people don’t do this.

Earlier this year Swift warned she would be getting more political and she's using her new song to promote a Change.org petition asking the Senate to pass the Equality Act.

Now we've got bad blood on both sides of the political aisle.