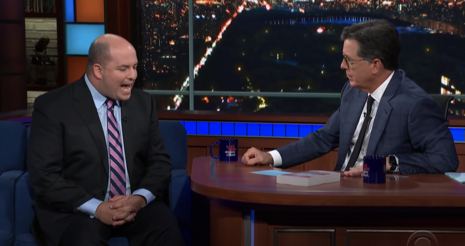 Stephen Colbert is wrong about a lot, but his biggest mistake yet was allowing Clown News Network’s Brian Stelter onto his show this week. The Late Show saw a drastic decrease in viewership during Colbert’s segment with the news anchor who scrambled helplessly in an attempt to defend Chris Cuomo.

On Tuesday Stelter appeared on the show and discussed the recent sexual assault allegations that drove NY Governor Andrew Cuomo to resign, they're implications for and his  brother Chris (AKA Fredo), who is an anchor for CNN. Stelter referred to this conflict of interest as an “odd conflict of rules” and tried desperately to spin the story in CNN’s favor.

When Stelter appeared on the show, ratings for his interview revealed it as Colbert’s least watched segment of the night. Wow, shocker! People hate Stelter’s show and it seems like they can’t even stand to watch him on Colbert’s show.

Cryin' Brian is a ratings killer.

“The craziest set of circumstances that you can imagine, right? A governor and a brother, both in these high-profile jobs. This is definitely awkward for CNN, though,” Stelter said during the interview. Yes, it is an awkward situation especially since both Stelter and Chris Cuomo have been obsessed with Andrew ever since his little brother got the gig at CNN.

After kissing Cuomo’s butt for several minutes, Colbert questioned Stelter about his new book, “Hoax: Donald Trump, Fox News, and the Dangerous Distortion of Truth.” Of course the CNN anchor used the opportunity to attack the Fox News team for being “radical” despite the fact that he was defending rioters who pushed for defunding the police.

Chris Cuomo is also being criticized for his involvement in crafting the fallen governor's response to the allegations. Coincidentally enough, Chris also had a “long planned” vacation in the Hamptons scheduled this week at the same time that he is under fire for “ignoring” the allegations about his brother.

SCOOP: I have obtained a video of @ChrisCuomo partying in the Hamptons two weeks before his brother’s resignation as governor@HumanEvents pic.twitter.com/H9dOSmyDKG

The Lame Show will be no more if Stelter ever makes an appearance again.