Critical Race Theory has been all the rage this year, literally. The media have adopted its language and assumptions, while companies, governments and even the U.S. government have inflicted the ideological poison on their personnel. And yes, it has crept into some schools. the mainstream media can’t stop talking about it. Conservatives have had enough of the left-wing indoctrination and many states have stepped up by creating legislation that prohibits schools from teaching curriculum that paints one race as superior to another. But now the backlash is sparking a backlash of its own, as progressives swear up and down they don't see what the big deal is. 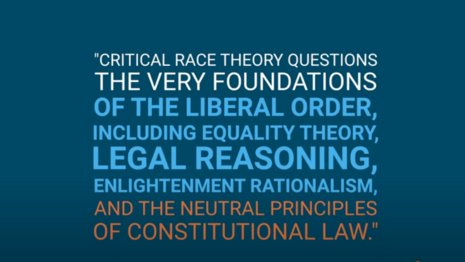 Valerie Strauss of The Washington Post published an article on June 11 titled “Teachers across the country protest laws restricting lessons on racism.” That’s The Post for you, professionals at creating deceptive headlines. Strauss covered the National Day of Action this past weekend in which hundreds of ‘educators’ gathered both virtually and in person in over 20 cities to keep CRT alive.

These teachers are angry because they can’t encourage students to hate America anymore. Zinn Education Project (a hard-left heavily pro-CRT organization) has created a pledge with over 3,000 signatures and insists that they will work to “better understand problems in our society,” and “develop collective solutions to those problems.” Ironically, they claim to be “for truth-telling” and  promoting “a more just society.”

(That any group named for Howard Zinn cares for truth is absurd on its face.) CRT is the opposite of reality. Rather than creating a real “solution” to the problem of “systemic racism,” critical race theorists begin with an assumption that everything is racist and claim that those who do not acknowledge this are just a part of the problem.

On June 13, USA Today published a similar article from  Melissa Smith, an Oklahoma City Community College professor. She had her class on Race and Ethnicity in the U.S. put on hold in light of a bill that was signed into law by Governor Kevin Stitt in early May. The law prohibits instructors from teaching “that one race or sex is inherently superior to another race or sex.” As a result her class became an elective rather than a required part of the curriculum. “What screams white privilege more than rewriting a degree program because white privilege makes white people uncomfortable?” says the professional indoctrinator.

The article went on to discuss how Republican lawmakers who ban CRT in schools have no real reason to do so. The author also talked to one attorney who claims that laws similar to the bill in Oklahoma “would ban women’s studies, too, or any discussion about race or gender bias,” and “eliminate any discussion about the civil rights movement.” Really? Any educator who actually paid attention in history class knows that there are plenty of ways to teach the civil rights movement without demonizing white people and blaming every issue in society on the color of an individual's skin.

Slate interviewed Ibram X. Kendi on June 12, asking questions such as why “Republicans and so many people are so in a kerfuffle about [CRT] now?” According to Kendi, Republicans are attacking CRT because they can’t attack the idea of “systemic racism” or “anti-racists.” Apparently he forgot that those terms were created by Critical Race Theorists. “I’ve certainly been inspired by [CRT] and critical race theorists.” Kendi states during the interview. He further explains that the ways when “formulat[ing] definitions of racism and racist and anti-racism and anti-racist” he not only used “historical evidence, but also Kimberlé Crenshaw’s intersectional theory.” Crenshaw of course is one of the most prominent ‘scholars’ of CRT.