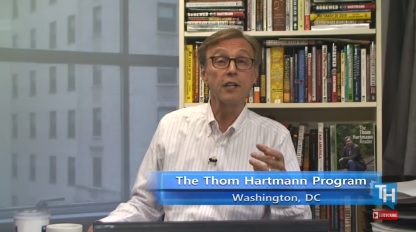 Hartmann wrote on left-wing Salon on June 26, “If liberal billionaires like Tom Steyer want to have a real and lasting impact on American politics, they should think seriously about buying a nationwide radio network.”

Specifically, he advised Steyer to buy iHeartMedia LLC (formerly Clear Channel) which is open to being bought out.

“If Tom Steyer wants to see Trump impeached, wants to see a semblance of balance on our airwaves, and wants a positive, healing, life-affirming progressive message available in every town in America, he should buy iHeartMedia tomorrow morning,” Hartmann wrote.

It’s easy to see why Hartmann would call for a billionaire fairy godfather and Tom Steyer has already committed $50-$70 million to anti-Trump efforts. That included his website and TV ads calling for Trump’s impeachment and millions trying to electing progressive candidates in the 2018 midterms — with the ultimate goal of changing the balance of power in Congress to impeach Trump.

But progressive radio faces structural problems which Hartmann ignored. Nathan Harden, writing for the Huffington Post, noted that conservative talk radio listeners skew older, which means there’s an audience for conservative radio. Even the former CEO Danny Goldberg of the failed liberal radio network Air America complained, “Many of the radio executives who programmed the right-wing radio stations and produced the shows did not agree with their politics, but like most business people, they gravitated to the easiest path to make the most money the quickest.”

In other words, conservative radio made money because there were listeners tuning in. Not so much for Air America.

Hartmann naturally blamed Air America’s failure on the right, specifically Mitt Romney’s Bain Capital. This dovetailed with his conspiratorial tone in the article since he also characterized Republican dominance of the radio waves as a product of the “right wing media machine,” rather than a market outcome. He cited Politico reporting that The Heritage Foundation pays millions sponsoring shows like Rush Limbaugh and Sean Hannity’s. $3.3 million in sponsorship from one think tank to two programs is hardly enough to ensure conservative electoral dominance.

Unsurprisingly, Hartmann entirely ignored the predominantly left-wing slant of national television and print news media, claiming, “Those of great wealth aligned with the left in America, however, has always largely ignored media, probably because they grew up in an American with the Fairness Doctrine and before the 1996 Telecommunications Act and they always just assumed that ‘the truth will eventually be known.’”

Hardly. The left dominates many media institutions in the U.S., from bottom to top. Liberal billionaire Michael Bloomberg even owns his own Bloomberg media empire.