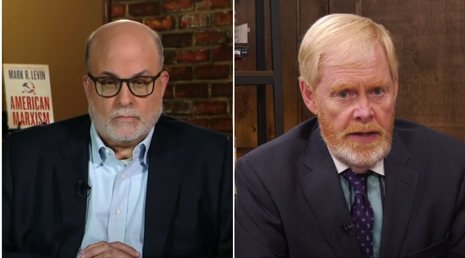 Levin told Bozell that the study by MRC Assistant Editor Joseph Vazquez — “America’s Most Notorious Billionaire Leaves His Mark on the World from a $2.3 Billion Education Behemoth to Racial Politics” — was “a great service” to “the nation.” Levin lauded the study’s findings, which exposed Soros’ scheme in creating a massive global university network dedicated to indoctrinating the next generation with his anti-American/anti-Western ideology in addition to pouring hundreds of millions into fomenting racial strife in America.

The study “conscisely go[es] through what this man [Soros] has been doing. Whether it’s ‘transnational feminism,’ whether it’s ‘critical race theory,’ whether it’s ‘climate change’ — all these things that we are battling today — the indoctrination of college students; the enshrinement of radical left professors with tenure and really in many ways the destruction of our school system,” Levin said. “This guy is behind all of it.”

Listen to Bozell's Jan. 14 interview with Levin on the MRC Business study below.

Bozell told Levin earlier in the two segments Levin dedicated to the study that “we’re not fully appreciating what George Soros is and what George Soros is doing. When you think, say, George Soros, conservatives say, well, you know, ‘this radical leftist pouring in money.’” Bozell stated that “it’s so much more than that.” “The world over ha[s] to understand what this man is up to.” As Bozell stated, “[Soros] has put in $32 billion dollars, billion dollars into the Open Society Foundations” since 1984 to influence global politics. “The numbers are just beyond staggering,” Bozell assessed. Soros is spending his money “on every single issue imaginable.”

“George Soros, if he gives $1 million to something, that’s pinching pennies for this guy,” Bozell summarized. “He has now announced this new educational system that he has set up, The Open Society University Network,” which he infused with a whopping $1 billion in seed money to push his agenda across the world.

Bozell informed listeners that much of the radical shift in global politics into a leftist cesspool can be attributed to Soros and his billions:

He continued: “If George Soros were to have wasted 90 percent of his money that he puts in every year, he still is putting in more than any conservative is putting in. It’s mind boggling.”

Levin concluded with a powerful warning based on his extrapolation from the MRC Business study: “[T]here are men and women with more money than Soros but they do not have the motivation. They do not apply their funds the way George Soros does. George Soros is an old man. He knows he’s not going to survive forever.” Levin continued: “[Soros is] putting all this money out there in advance of him — of himself — dying.” In Levin’s analysis, “Soros is making sure that his money goes exactly where he wants it to go so from the grave he can reach out and try and destroy America.”