Horrible disasters like the recent Category-4 Hurricanes Harvey and Irma focus attention on heart-wrenching stories of lost lives, near misses and property destroyed in the storm or ravaged by looters.

They also have an uncanny way of illustrating the many people who will pull together in a crisis and how the benefits of capitalism are often used to help those in need. And in fact, although the liberal news and entertainment media often criticize businesses, many business owners and companies are hard at work helping victims in the aftermath of these devastating hurricanes.

Furniture retailers, realtors, turkey farmers, restaurants and truckers were just some of the small businesses across the country that helped in whatever ways they could — whether that was rescuing victims of flooding, providing food, shelter and supplies or holding fundraisers. Large U.S. corporations also pledged more than $160 million by Sept. 3, to aid Harvey victims and many of those companies increased their giving because of Hurricane Irma.

One of the most inspiring examples in Texas has been “Mattress Mack” Jim McIngvale who opened up his Gallery Furniture Store showrooms to hundreds of people seeking refuge and sent trucks to rescue people. He also fed his guests for free and gave out his personal phone number in order to try to assist as many people as possible.

“I’m part capitalist and part social worker and this is what I like to do,” Mack told CBS News. He’s also a Catholic who told The Houston Chronicle, “My faith defines me. It’s who I am.” He said his faith motivated him to help as many of his Houston neighbors as he could.

Mack was in good company. Grocery stores, real estate brokers and countless businesses and companies from other U.S. cities and towns pitched in to help Harvey victims. Although Irma’s damage is only starting to be assessed, the Miami Herald found some businesses already working to help from staving off cabin fever and cell phone charging, Duracell’s program to help provide free batteries, charging and wifi, and banks waiving fees and offering payment extensions.

Texas grocery chain H-E-B did what it could to keep stores open during the storm in order to meet people’s needs. It also dispatched supply convoys and mobile kitchen trucks to feed evacuees. That’s something the company has sent out to help emergency victims and first responders for other disasters since the 1980s, according to WBUR’s interview with H-E-B Houston division president Scott McClelland and Texas Monthly.

When FEMA couldn’t get trailers of water to Beaumont Texas, the city called on H-E-B.

“I remember the emergency management coordinator in Beaumont called me and said, ‘If it wasn’t for H-E-B, we wouldn’t have water in the city of Beaumont for Friday.’ I think that’s pretty darn special, and a reflection of everything H-E-B does, and the spirit of H-E-B,” the company’s director of emergency preparedness Justen Noakes told Texas Monthly.

Local real estate executives, and individual realtors even helped rescue Houston residents from flooding according to the Houston Business Journal and Inman.com

CNBC.com reported that LuminAid, makers of portable, waterproof light packs, donated 2,500 lights to Irma victims after sending 1,500 to Texans. CNBC said the company also has a way for customers buying lights to purchase them at a higher price in order to donate a light to someone in need.

It hasn’t just been local businesses in Texas and Florida trying to give back to their communities. People from far and wide, companies small and large; all sought to aid Harvey and Irma victims.

“We felt the best thing for us to do is to raise some money, because obviously sending turkeys down there doesn’t many a lot of sense,” CEO David Jaindl told Lehigh Valley news outlet WFMZ-TV.

WFMZ-TV also reported that PPL Electric Utilities is part of two voluntary assistance networks of electric companies, which send workers and trucks out to other utility regions when they are in need. A spokesman for PPL said they had sent 380 people to help restore utility operations in Florida. BGE, Exelon, Delmarva Power and Pepco also sent about utility contractors to assist Florida’s operations. 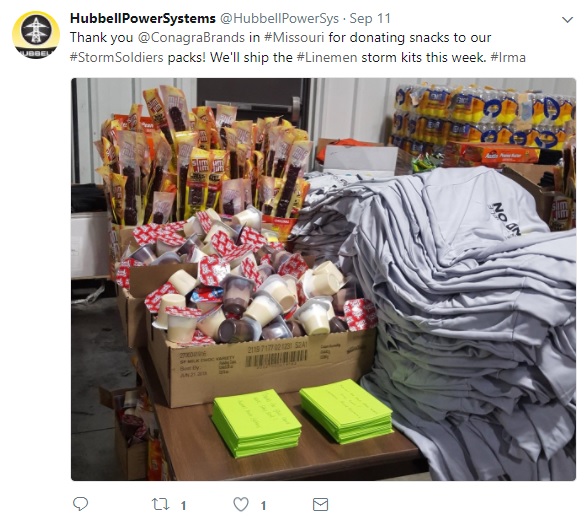 Inc. Magazine listed 25 companies helping hurricane victims you can support. One of them is Hubbell Power Systems, based in South Carolina but with operations in other states include a plant in Missouri. The company sent much needed utility products to the Houston area following Harvey, teams of people to assist and 1,000 care packages to electric utility linemen.

“It has a t-shirt, a little hand towel, bottled water, crackers and protein bars, and a hand written note thanking them for what they’re doing and that we hope they stay safe while they’re restoring the power. Because those linemen will work three days straight without taking a break to get the power back on,” Hubbell’s Director of Marketing Communications Crystal Mistretta told Ozarksfirst.

By early September, corporations had already pledged more than $160 million to Harvey relief, according to the U.S. Chamber of Commerce. CNN reported that many companies increased their donations due to Irma.

Just a handful of the long list of corporate donors included Disney (pledged $2.5 million to Irma relief after helping raise $16 million for Harvey), Walmart (up to $30 million in cash/product/match donations), Verizon ($10 million), Michael Dell ($36 million), Dick’s Sporting Goods ($5.5 million in products and assistance to rebuild youth sports programs and facilities), IBM ($4 million — $2M for each disaster), and Bank of America ($3.5 million to victims of Harvey and Irma).

On Sept. 12, Hand in Hand held a televised fundraiser with celebrities including Beyonce, Oprah, George Clooney, Julia Roberts. Verizon, Apple and other companies backed Hand in Hand with millions, according to Reuters and CNN.

CNN said the Chamber of Commerce tracked business donations from many previous natural disasters including $1.08 billion in aid to help the Gulf Coast after Hurricane Katrina and Hurricane Rita in 2005.

Ahead of Irma’s Florida landfall, airlines put caps on fares, Airbnb activated a Disaster Response Program to allow people to take in Florida evacuees for free and mobile phone companies announced they would waive overages for data, texts and calls for their Florida customers because of the impending storm.

Jetblue announced it would reduce fares of $99 and $159 on “any remaining seats in select markets” to help the Florida evacuation, CNN reported. American Airlines also capped main cabin fares for single leg flights at $99, while Delta capped the price of all flights to and from south Florida and the Caribbean at $399 maximum.

But CNN noted, some airlines had been attacked for “skyrocketing fares” after people tried to book flights online ahead of the hurricane. Those high prices were driven by website algorithms responding to last minute, high demand for flights.