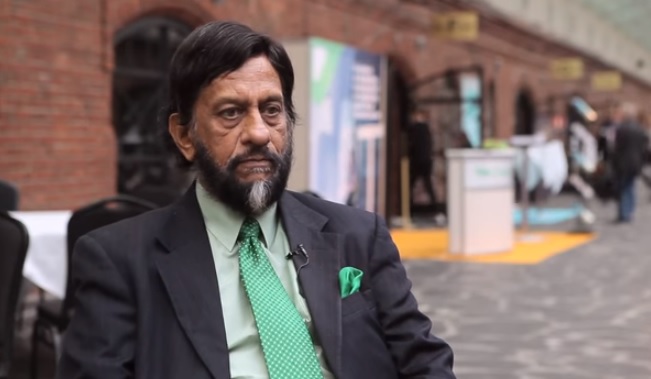 When Dr. Rajendra K. Pachauri was chairman of the UN’s Intergovernmental Panel on Climate Change, the networks relied on him to warn about the threat of climate change to planet earth.

Now that he is under fire for allegedly sexually assaulting a female colleague, the networks want nothing to do with the scandal. The Telegraph reported on March 1, that the 75-year-old Pachauri was formally charged with sexually assaulting a female employee at a think tank he ran in India. Allegations like that could undermine Pachauri’s credibility and hurt any issue he was connected to, including the media’s much-loved climate change agenda.

In 2007, Pachauri stood beside Gore to receive a joint Nobel Peace Prize for their work on climate change. Now, police have filed a 1,400-page charge sheet which included allegations of criminal intimidation, harassment and “insulting the modesty of a woman,” The Telegraph reported. He has denied the allegations.

None of this has been mentioned in broadcast network news programming, just as they failed to report his resignation from the IPCC in 2015.

Claims of sexual harassment first surfaced in February 2015, when a woman who had worked at the Delhi-based environmental think tank The Energy and Resources Institute (TERI) Pachauri ran, filed a police complaint. Pachauri resigned from the IPCC the same month after being at its helm since 2002, but did not admit it was due to the investigation.

The Telegraph reported that in July 2015, TERI removed Pachauri from leadership, but sparked outrage in January 2016, by creating the position of executive vice-chairman for him. The anger caused them to put him on indefinite leave.

Although the networks never covered the allegations against Pachauri, they had interviewed him at least six times between 2007 and 2012 about climate change. Far more often the networks hyped the conclusions, reports and gatherings of the IPCC without specifically referencing its former chairman.