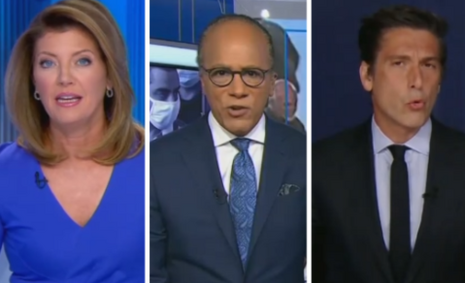 CNBC reported Aug. 15 that The National Association of Home Builders (NAHB)/Wells Fargo Housing Market Index “dropped 6 points in August to 49” for its eighth consecutive monthly decline. Anything below a 50 is considered negative. Fox Business reported that the result marked the “worst stretch for the housing market since the 2008 financial crisis.” NAHB Chief Economist Robert Dietz said in a statement obtained by CNBC that “‘[t]ighter monetary policy from the Federal Reserve and persistently elevated construction costs have brought on a housing recession.’” But ABC World News Tonight, CBS Evening News and NBC Nightly News, which spun themselves silly in recent days either by avoiding the admission that the U.S. is in a recession or by legitimizing the White House’s redefinition of the term, entirely ignored the sour housing news during their Aug. 15 broadcasts.

The housing news is even worse when broken down on a regional basis. “Regionally, on a three-month moving average, builder confidence in the Northeast fell 9 points to 56, and dropped 3 points in the Midwest to 49. In the South it fell 7 points to 63, and in the West, where home prices are highest, it declined 11 points to 51,” CNBC wrote. The freefall in the builders’ index is compounded by the Aug. 8 report that consumer confidence in the housing market “dropped to the lowest level since 2011.” CNBC reported then that just “17% of those surveyed in July said now is a good time to buy a home, down from 20% in June.”

Apparently none of the housing news was worth bringing up last night for the Big Three, perhaps because the term “recession” is a political "buzzword" that could spoil Democrats’ chances in the upcoming midterm elections. And the Big Three evening nets aren’t the only ones practicing political obfuscation of the word “recession.”

An Aug. 2 NewsBusters analysis found that after Biden made the absurd claim that the U.S. wasn’t in a recession following a second consecutive quarter of GDP contraction, “all but one of the ABC, CBS, and NBC morning and evening shows either repeated or promoted the Democrat’s economic denialism. That’s 10 of 11 broadcast network shows covering the topic since the announcement on Thursday of the negative growth.”

It appears the ABC, CBS and NBC networks are doing everything they can to help the flailing left-wing hegemon in Washington lumber across the finish line in November.