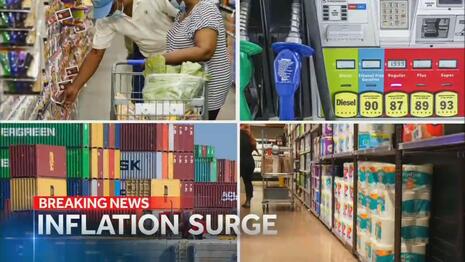 The inflation crisis has gotten so bad that multiple liberal outlets are now admitting that it spells disaster for President Joe Biden’s economic agenda.

CNBC published an eye-opening piece headlined, “Inflation has taken away all the wage gains for workers and then some.” The story analyzed that “[r]eal average hourly earnings when accounting for inflation, actually decreased 0.5% for the month. A 0.9% inflation increase negated a 0.4% rise in wages.” In essence, “[w]hat looked like a big jump in workers’ wages during October turned into just another gut punch after accounting for inflation,” according to CNBC.

So much for Biden’s false claim that “[w]ages have gone up higher, faster than inflation.” CNN just released a devastating report headlined, “Why inflation is a political nightmare for Biden.” New York Magazine also acknowledged in a sobering headline, “It’s Official: The Era of Cheap Everything Is Over.”

The Daily Mail released a story directly blaming inflation on Biden: “Bidenflation drives Americans to dollar stores: Spending at discount chains rose 65% last week ahead of the holidays as consumer prices rise to [their] highest level in 31 years.”

The figures underscored what all Americans already know. Every trip to the supermarket shows that basic foods like eggs or meat are shooting up in price. The gallon of gas it takes to get to the weekly grocery run is currently averaging $3.40 nationwide. Such pain in the pocket, coming off a demoralizing pandemic that is nearly two years old, threatens Biden's already weakened political standing as he battles a corrosive political issue affecting voters every day.

New York Magazine’s analysis was blunt in its lede paragraph:

Not since George H.W. Bush’s administration has your paycheck been pummeled by inflation like this. People are seeing, for the first time in years, a real breakdown in the economy — bare shelves in supermarkets, weeks-long waits for household goods to get delivered, pricier checks at restaurants.

The magazine noted that inflation “is, by far, the biggest concern on Wall Street — more than COVID-19, unemployment, or anything Elon Musk might be up to on Twitter.”

There can be no sugar-coating the reality of the problem anymore. Inflation is a serious threat and the media must recognize it and report on it accurately. But when the report came out, some initially ignored it and treated inflation like it doesn’t even exist. When the BLS released its terrible report at 8:30 a.m. on Wednesday, ABC's Good Morning America, CBS Mornings, NBC's Today and NBC's 3rd Hour of Today all censored the news during their morning broadcasts. However, ABC, CBS, and NBC have covered it on subsequent morning and evening newscasts.