CNN’s Chris Cuomo FAWNS Over Paul Krugman: ‘I Need Him;’ He ‘Lifts Up My IQ’ 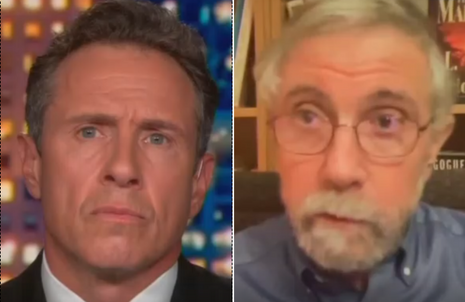 Does CNN host Chris Cuomo know what satire is? He actually suggested that New York Times economist Paul Krugman — whose wild predictions of an economic boom are falling flat — makes him more intelligent.

The left-wing anchor brought Krugman on the Oct. 13 edition of CNN’s Cuomo Prime Time to put lipstick on a string of terrible economic news plaguing President Joe Biden’s agenda. Cuomo said that  “there are a combination of economic indicators that are conspiring to create a slowdown.” Turning to Krugman, he declared: “Few know the stakes better than economist and New York Times columnist Paul Krugman.”

Krugman first went after the worsening supply chain disruption issue and put a major spin on it: “It’s not actually the case that less stuff is getting through to people.” The far-left economist pointed to the heightened “consumption of consumer durables” to prove his point.

But his spin is false. The University of Connecticut just reported that the supply chain bottleneck “seems to be caused by goods being stuck in transit, especially due to congestion at ports and other delivery challenges.” The Wall Street Journal also noted that “overwhelmed world-wide transportation networks limit supply—down to the home décor.” In other words, “less stuff is getting through to people.”

Despite that, Cuomo hilariously said of Krugman to another guest later on in his show, “That guy’s smart huh?” Then came the kicker: “I need him. Lifts up my IQ.”

Krugman then turned to the terrible jobs situation. He conceded that “we may end up with several million fewer people working than we had before because they’ve decided they actually don’t need or want to do those jobs, and we’ll come to live with it.” Krugman claimed that the situation is “not permanent,” but then said the economy is “just a little overwhelmed at the moment.”

But his hedged take slams up against Krugman’s celebratory thrill-up-the-leg moment in July when he exclaimed on Twitter: “It's morning in America! Sort of seriously. One take I haven't seen is that so far the rate of job growth under Joe Biden is running somewhat faster than during the recovery that reelected Ronald Reagan.”

It's morning in America! Sort of seriously. One take I haven't seen is that so far the rate of job growth under Joe Biden is running somewhat faster than during the recovery that reelected Ronald Reagan 1/

Krugman astonishingly is still holding out for an “economic boom” even though he admitted that “Biden thought we’d have a summer of joy, and that didn’t happen.” But, said Krugman, “maybe we’ll be having a spring of joy next year.” So no “morning in America”? Krugman wrote in May that “[t]here definitely is a boom underway, even if a vast majority of Republicans claim to believe that the economy is getting worse.”

Yet liberal outlet Bloomberg News just reported: “A decline in consumer expectations suggests the U.S. economy is in recession even though employment and wage growth indicate otherwise, according [to] a new study co-authored by a former Bank of England policy maker.” Asset Management One global fixed-income money manager Akira Takei also reportedly told Bloomberg News based on a flattening Treasury yield curve that “‘There is a good chance that the U.S. will enter recession’ in the coming year.”

So where exactly is the “Biden boom,” Krugman? Of course, Cuomo never asked Krugman why his predictions haven’t panned out.

Conservatives are under attack. Contact CNN at 1-(404)-827-1500 and tell it to report the truth on the dangerous state of the U.S. economy under the failed policies of the Biden administration.