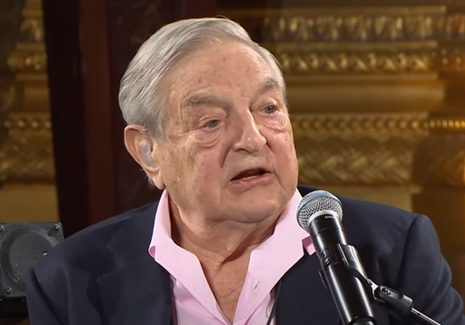 Campaign finance data show that Soros has poured $1 million so far to protect the far-left Newsom from political doom by the state’s pending recall election. MSNBC anchor Ayman Mohyeldin noted in July that Newsom’s disastrous handling of COVID-19 was a “driving force behind the recall effort.” Newsom came under heavy political fire for violating his own COVID-19 rules by eating inside the highfalutin French Laundry restaurant in Napa County, California.

In the face of the glaring hypocrisy, Washington Post columnist Henry Olsen wrote that Newsom had imposed “some of the strictest [COVID-19] requirements anywhere in the United States.” National Review Editor Rich Lowry attributed the recall to Newsom's hypocrisy considering his “far-reaching and extensive lockdowns that were arbitrary (no outdoor dining — except for people making movies!) and economically damaging.” Soros is clearly fighting to keep Newsom’s insane policies in place.

But Soros was not the only notable leftist to throw his weight behind Newsom. Founder and CEO of the streaming platform known for promoting the pedophilic film Cuties, Netflix’s Reed Hastings gave at least $3 million to Newsom’s anti-recall effort. The Netflix executive could just be reciprocating the special treatment his company received when Newsom allowed film and TV studios to work despite state lockdowns. In addition, movie director Stephen Spielberg has given $25,000 to the anti-recall effort and singer Barbra Streisand gave $2,500.

George Soros threw another $500k in support of Gavin Newsom in the recall effort. Brings his total to $1 million https://t.co/z5zedNVLJw pic.twitter.com/xZvzA6VAzs

Soros has kept himself busy in politics since former President Donald Trump exited office. His gargantuan political spending to spread his radicalism has not slowed down. Recently, Soros dumped another $1 million into the anti-police group Color of Change PAC. Color of Change PAC is currently behind a disgusting petition called “Cut Ties With The [Fraternal Order of Police (FOP)].” FOP is self-described as “the voice of our nation’s law enforcement officers.” Color of Change PAC spewed metaphorical bile that the FOP was “the deadliest frat in the world.” Soros’s Open Society Foundations (OSF) also just pledged a massive $100 million to spread radical feminist ideas across the globe.

But there’s more! OSF pledged in April to spend a whopping $20 million for a campaign to rally progressives around President Joe Biden's multitrillion-dollar spending agenda. Axios noted OSF’s involvement could signal a “call to action” for the left:

Backing from the George Soros-founded group could serve as an important call to action for Democratic donors and activists who support Biden's initial $2 trillion+ infrastructure plan but want to see him go bigger.

Perhaps the $1 million that Soros gave to Newsom’s anti-recall effort is another “call to action” to rally donors to prevent the disgraced California governor from suffering political defeat.