EMBARRASSING! NYT’s Tom Friedman Makes a Fool of Himself Glorifying a ‘Biden Boom’ 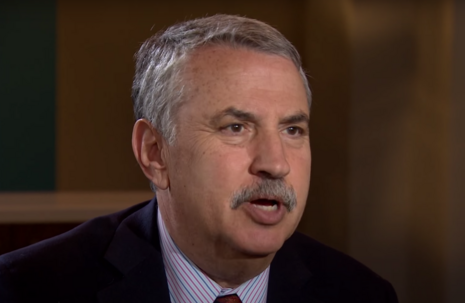 Friedman spewed in his absurd op-ed “The Biden Boom” that Biden has a “chance to supercharge the economy.” However, Friedman then spent eight paragraphs without even talking about the economy once. Instead, he went on an anti-GOP rant and whined how he thought that “once Joe Biden took charge my anxiety over how close we came to losing our democracy would soon fade. It hasn’t.”

He also spat racist insanity that the post-2020 election GOP had “decided to burn down any pieces of [the] bridge and compete only for a white-dominated 20th-century America.”

Friedman later said that to stop the Trump GOP, Biden needed to “deliver real stuff that enables all Americans to realize their full potential.” He continued: “And the key to that is to make sure that the $1.9 trillion stimulus and his coming $3 trillion green/infrastructure proposal actually deliver as promised.” Friedman said that Biden should “not only channel his inner F.D.R. but also a little Ronald Reagan and some rip-roaring capitalism.” Friedman argued as if Reaganomics and FDR’s disastrous New Deal welfare state belonged in the same sentence. [Emphasis added.]

He also seemed to have adopted the notion that taxpayer dollars grow on trees:

If we do this right, Biden’s stimulus will fuel an already restructuring economy and supercharge it. With so much cheap money available, so much cheap access to high-powered computing, so many new services being digitized and so many new problems to solve, we have all the ingredients for a burst of innovation, start-ups and creative destruction.” [emphasis added.] 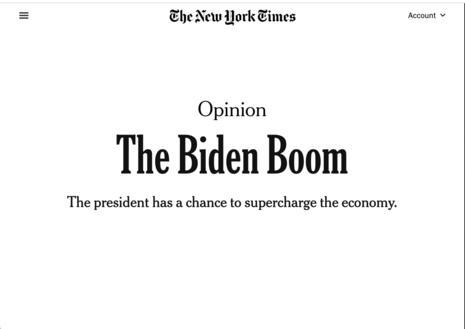 Friedman also tried to confuse capitalism by encouraging Biden to follow up on his eco-extremist proposals: “Biden also needs to maximize his green aspirations. It’s not just about unleashing spending. It [sic] also about unleashing capitalism.” Friedman stipulated that America needs a “whole lot of everything,” including “wind,” “solar,” and “hydro.” He claimed that one of the ways the government can lower the costs of green energy is by using “its buying power to drive down costs.” What does government “buying power” have to do with capitalism? [Emphasis added.]

He used California’s 2020 decision to ban the sales of new internal combustion engine cars by 2035 as an example. The Institute for Energy Research rebuked California’s ban as placing “Californians into a financial dilemma of not being able to afford a vehicle.” But, according to Friedman, that’s just “smart capitalism.”

Conservatives are under attack. Contact The New York Times at 800-698-4637 and demand it distance itself from Tom Friedman’s propaganda.