CNBC’s Jim Cramer may have made a Freudian slip yesterday when he called House Speaker Nancy Pelosi “Crazy Nancy” to her face on live TV. He has since apologized. 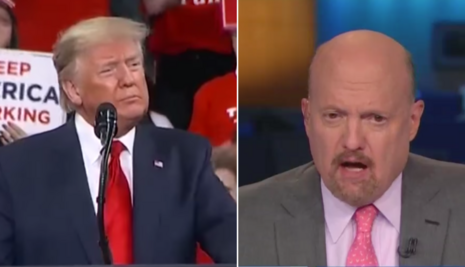 But the Twitter woke mob had smelled blood. In response to Cramer’s gaffe, blue check marks all over the Twitterverse were either blowing their collective gaskets or calling for Cramer’s head to be served up on the proverbial silver platter. Sounds very similar to when leftists like HBO’s Bill Maher bashed Cramer in 2009 when he had compared former President Barack Obama’s anti-Wall Street sentiment to communist leader Vladimir Lenin.

President Donald Trump, in a hilarious troll of the Twitter mob, defended Cramer: “Jim, you didn’t make a mistake. It’s true, and that’s why you said it. No pandering!” 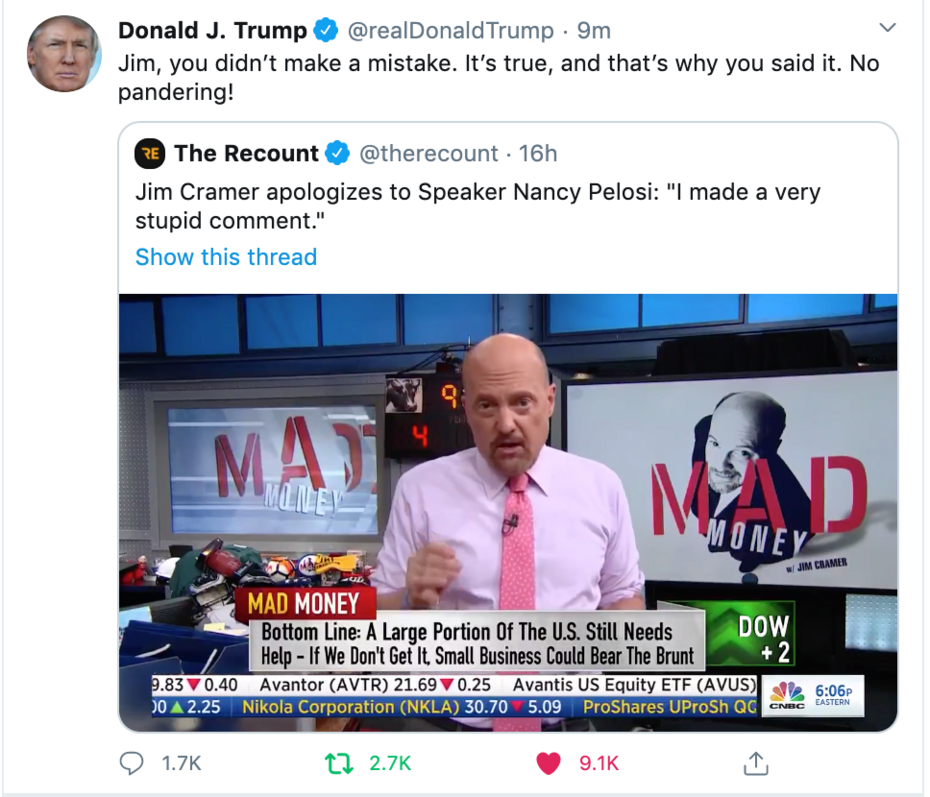 The leftist Daily Kos tweeted out a ridiculous hit piece with the caption: “Calls for CNBC host's resignation after he used a misogynistic slur live on-air to Nancy Pelosi.”

Musical artist and Washington Post op-ed writer Holly Figueroa O'Reilly demanded Cramer not be the “moron” she thought the president was: “Jim Cramer, while interviewing Nancy Pelosi, called her ‘Crazy Nancy’. Really? JFC, show a little class. Just because the president is a fucking moron doesn't mean you have to be.”

MSNBC Anchor Yasmin Vossoughian, like The Daily Kos, whipped out the third-wave feminist take on Cramer’s comments: “I’m sorry- this is not ok. It’s disrespectful and misogynistic...nope.”

HuffPost contributor and feminist activist Kimberley Johnson also unleashed feminist woke-speak: “Sexists like @jimcramer don’t insult men in this way. They save these specific kinds of insults for women because patriarchy.”

Laughably self-proclaimed “conservative” Washington Post columnist Jennifer Rubin could only get three letters out followed by a couple of punctuation marks: “WTF??”

Disgraced former Congresswoman Katie Hill screeched: “When he condescendingly says ‘you know what I mean’ after insulting her - he’s every dude who says something horrible and sexist and then goes ‘you know I was just joking.’” Hill is probably not the best person to raise moral issues.

Mail-art project PostSecret founder Frank Warren projected his own childhood onto the gaffe. Warren tweeted: “As a boy raised by a single mother I am especially sensitive to bullies who think they can humiliate adult women publicly. Jim Cramer you are a coward and a dinosaur. #JimCramer.”