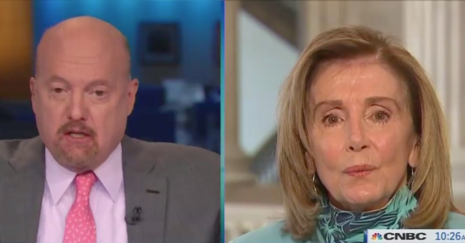 Cramer expressed his frustration about the ongoing friction between the White House and U.S. Congress on a coronavirus aid package during the September 15 edition of Squawk on the Street. He perhaps got a bit too frustrated. Cramer said: “Madam Speaker, I’m listening to you and three days ago you told CNN you were optimistic about a deal.” Pelosi interjected: “I am.” But Cramer wasn’t buying it: “Really? I mean, I got to — I thought it got taken right off the table.” Cramer continued: “You got Mark Meadows going and saying he was the skunk at the party. He didn’t really— He’s gotten in the way between you and — I think — Secretary Mnuchin.” Then came the hilarious blooper: “What deal can we have, eh Crazy Nancy?”

Cramer immediately tried to save himself, but it was too late: “I’m sorry! That was the president!  I have such reverence for the office. I would never use that term.” Pelosi retorted: “But you just did. But you just did.”

Watch the train wreck happen below:

Cramer then redirected to say: “The reverence I have for the office is so great that I think it’s a travesty to ever call— Look, you spent your whole life in public service.”

Pelosi then used the awkward moment to accuse President Donald Trump of being the one who was crazy, not her:

Let me just say this: anything the president says is a projection of his own insecurities. He calls other people crazy, because he knows he is. He calls— He complains about this, that and the other thing because he knows his own shortcomings. He’s a master of projection. So any time he says something, you say, ‘Uh oh, that’s what he’s thinking of himself.’

Cramer didn’t hold true to his “I think it’s a travesty” to call someone in office “crazy” stance, and allowed Pelosi to insult the president without ever correcting her.

Contact CNBC at 201-735-2622 and demand it hold politicians to the same standard it holds President Trump to when they insult the president.