The ABC, CBS, and NBC morning news shows didn’t give any coverage to the unemployment rate dropping well below expectations into the single digits during their Friday edition programming. 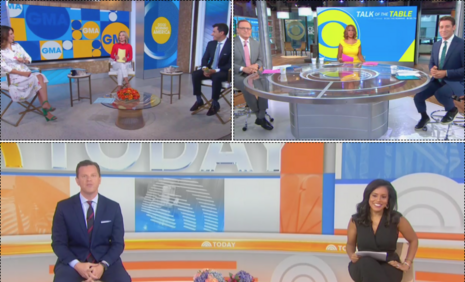 A new Bureau of Labor Statistics (BLS) report released at 8:30 AM, revealed stunningly positive news on the state of the jobs market: the economy added 1.4 million jobs in August. But there’s bigger news: the unemployment rate dropped nearly 2 percentage points from 10.2 percent in June to an astonishing 8.4 percent. That’s massively better than  economists surveyed by Refinitiv, who were expecting a drop to 9.8 percent.

The result was a blowout of expectations. Fox Business reported that “It marks the first time since March that unemployment has been below 10%.” Guess what: ABC’s Good Morning America (GMA), CBS This Morning and NBC’s Today gave the news zero coverage.

Hot Air’s Ed Morrissey gave a breakdown for how significant this news is: “Thus far, warnings of collapse in the jobs market due to the end of government supports have failed to come true.” This apparently wasn’t worth any coverage by the Big Three morning news shows.

Some of the notable gains in employment came from retail and professional/business services, which added both 249,000 new jobs and 197,000 jobs respectively, according to the BLS report. In leisure and hospitality, employment “increased by 174,000 in August, with about three-fourths  of the gain occurring in food services and drinking places (+134,000).”

But that wasn’t all: The number of Americans on furlough also dropped significantly. “24.2 million persons reported that they had been unable to work because their employer closed or lost business due to the pandemic--that is, they did not work at all or worked fewer hours at some point in the last 4 weeks due to the pandemic,” noted the report. This was down “from 31.3 million in July,” according to the report. That’s a drop of 7.1 million.

ABC, CBS and NBC instead decided to run other meaningless puffy segments in a blatant slap in the face to viewers concerned about the state of the jobs market.

NBC’s Today’s segment with NBC senior business correspondent Stephanie Ruhle, who one would think is responsible for getting economic news out to viewers, droned on about Labor Day sales.

Not even NBC’s 3rd Hour of Today bothered to cover this news either. Instead, a portion of the show dealt with NBC Today’s weather and feature anchor Al Roker talking about stars and joking “about a ‘fancy’ port-a-potty he once rented for an outdoor party."

GMA has pulled this kind of stunt before. When the BLS released a jaw-dropping report July 2, which revealed that total nonfarm payroll employment rose by 4.8 million in June, GMA ignored that story also.

Toward the end of CBS This Morning, the anchors spent 213 seconds promoting a Massachusetts theater putting on productions in a socially distant environment.

CBS This Morning’s only mention of the news was an old negative prediction that the jobs report would "point to a still-slow recovery" in the tiny moving graphic underneath the chyron. That same headline repeated throughout the segment with no update. 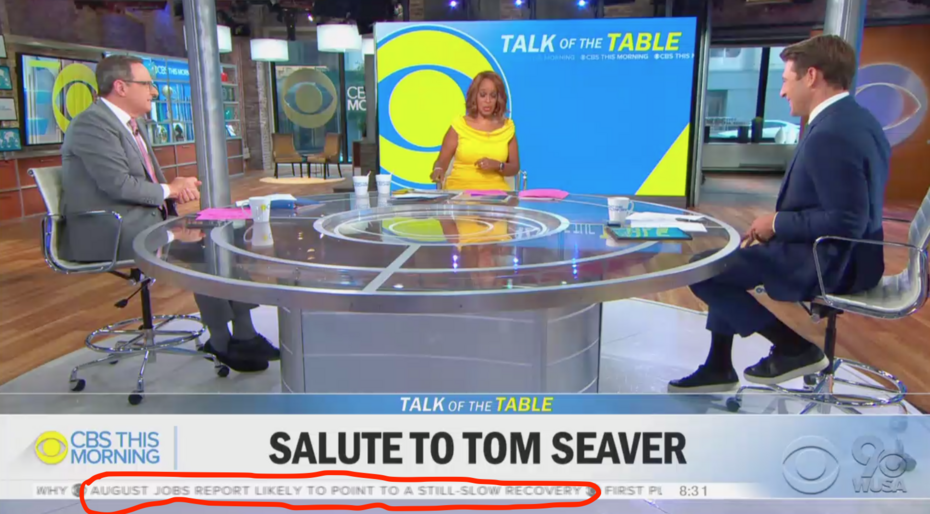 Here are 13 instances in 2020 where ABC’s World News Tonight, CBS Evening News and NBC Nightly News have ignored good economic and market news that occurred in the pandemic-afflicted economy.

The ABC, CBS and NBC morning news shows have proven themselves to be no better than their evening news show counterparts as sources for good economic news.

It is clear that if the news even has the slightest chances of boosting President Donald Trump’s economy, ABC, CBS and NBC will either ignore or downplay it.