CNN guest Johns Hopkins University professor Marc Goldwein punctured the left’s narrative that student loan debt forgiveness for those making less than $150,000 will not increase inflation during a guest appearance. 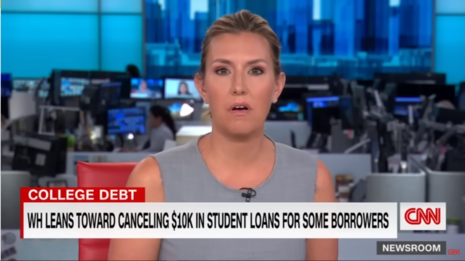 “What we really need to do is make college affordable, not send a $10,000 gift to people that already have in many cases advanced degrees,” Goldwein said on the Aug. 23 edition of CNN Newsroom. But CNN reporter Poppy Harlow pushed back on Goldwein by citing a far left-economist tied to liberal billionaire and megadonor George Soros who reportedly claimed that canceling student loan debt would not increase inflation.

Goldwein called those claims “baseline trick” because the student loan repayment pause “was always meant to be a temporary pause. If it’s a permanent pause it’s not student debt: It’s student grants.”

Goldwein also said, “disproportionately student debt is being held by people that have advanced degrees and pretty good income.”

That may not be comforting news for Americans who can look forward to an extra $300 billion tax burden if $10,000 in student loan debt for people who make less than $125,000 is enacted, according to the Penn Wharton Budget Model.

Harlow continued to press Goldwein on the additional “burden” that student debt repayment would cause to Americans, but the economist made clear that the other alternative was a recession. Goldwein responded that forgiving student loan debt is “gonna make the Fed’s job harder and that means it’s gonna increase the risk [that] they’re going to have to drive us into recession to get inflation under control.”

Goldwein argued that resuming student loan debt repayments was common sense. “We could send everybody another round of checks to pay for their inflation costs, but that would actually make inflation worse. What we need to do now is get inflation under control. One of the easiest ways to do that is to ask people to start paying back the debt they already owe, to start making the principal payments that they already agreed to.”

Goldwein explained that even if one assumes that President Joe Biden’s so-called “Inflation Reduction Act” will reduce the deficit, canceling student debt would wipe out any possible deficit reductions.

“The Inflation Reduction Act saves, maybe, $300 billion dollars in the first ten years. If we do cancel $10,000 in debt and just extend the policy a few months, we’re gonna be at about that much in terms of new costs. So all the deficit reduction is gonna be wiped out. At the same time, we’re probably going to do more to increase inflation from debt cancellation than any inflation reduction from the Inflation Reduction Act.” [Emphasis added].

Biden announced on Twitter that the government will work to forgive debt up to $20,000 for students who went to college on Pell Grants and up to $10,00 for those who did not receive Pell Grants.

In keeping with my campaign promise, my Administration is announcing a plan to give working and middle class families breathing room as they prepare to resume federal student loan payments in January 2023.