President Joe Biden’s chief economic advisor claimed that the economy is “demonstrating resilience” and attempted to split hairs over the definition of a recession to protect his boss at the expense of the American people. 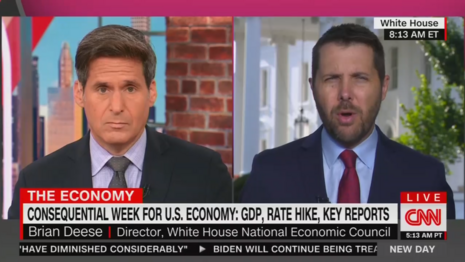 “If you would, finish this sentence for me,” CNN host John Berman asked Deese. “The state of the U.S. economy is what?”

Deese responded: “I think the state of the economy is demonstrating resilience in the face of very significant global economic challenges.”

Sen. Ted Cruz (R-TX) tweeted: “These aren’t the droids you’re looking for,” in response to Deese’s misleading word games around the word “recession.” It was a reference to a famous scene from Star Wars where the character Obi-Wan Kenobi uses The Force to control stormtroopers’s minds and trick them into letting him pass by freely.

These aren’t the droids you’re looking for. https://t.co/B8XoIDWNSE

And to Deese’s gaslighting on the economy, U.S. GDP fell 1.4 percent in the first quarter of the year, according to CNBC. If GDP falls once again — as the entire country will learn this Thursday — then the U.S. will enter a recession. But that seems to be a very inconvenient truth for the Biden administration. The White House released a July 21 blog that redefined the word “recession” in typical Orwellian fashion:

“What is a recession? While some maintain that two consecutive quarters of falling real GDP constitute a recession, that is neither the official definition nor the way economists evaluate the state of the business cycle.”

Deese also made an absurd attempt to take credit for gas prices dropping slightly. “Because, in part, of the actions this administration has taken, we’ve seen gas prices come down significantly, about seventy cents, over the course of the last month and a half.”

A recent White House blog post similarly argued that the U.S. is technically not in a recession until the National Bureau of Economic Research (NBER) says so. NBER defines a recession as “a significant decline in economic activity that is spread across the economy and lasts more than a few months,” according to the nonprofit’s website.

It is also worth mentioning that the leftist Bill & Melinda Gates Foundation funded the NBER with a whopping $5,571,065 from 2007 to 2019, according to Foundation Directory Online.

Conservatives are under attack. Contact CNN at 404-827-1500 and demand it report honestly on President Joe Biden’s culpability for the inflation crisis.