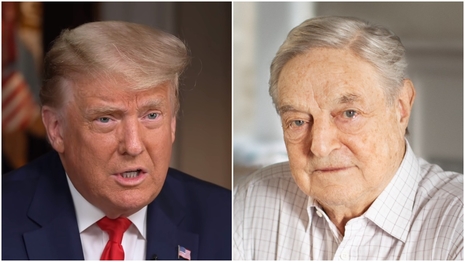 A group funded with over $2 million from liberal billionaire George Soros is demanding that Apple ban another free speech platform and throttle its reach — just like it did to Parler.

Citizens for Responsibility & Ethics in Washington (CREW) urged Apple CEO Tim Cook to ban former President Donald Trump’s social media platform from the Apple App Store in an April 21 letter. The group pocketed at least $2,350,000 from Soros between 2017 to 2020, according to Open Society Foundations records. Truth Social is Trump’s social media platform that launched on Presidents Day as a freer alternative to mainstream platforms like Twitter.

CREW postured itself as a “non-partisan organization dedicated to ensuring transparency and accountability” in its letter, despite the fact that Soros funds it. And to make things worse, the leadership of CREW has historically been left-wing. TIME described former CREW Chairman David Brock as “one of the most influential political operatives in the Democratic party,” according to InfluenceWatch.

Written by CREW President Noah Bookbinder, the letter absurdly claimed that “Removing the Truth Social platform from the App Store is consistent with Apple’s pledge to ‘stand for democracy’ and prevent the promotion of extremist content.” Bookbinder justified his extreme pro-censorship position by repeating a mantra of the liberal media: Trump was partially responsible for the Jan. 6 “violent insurrection” at the United States Capitol.

But Bookbinder didn’t stop there. “Every company that now enters into business with Trump must recognize that it is essentially endorsing this dangerous and anti-democratic conduct.”

Bookbinder even relied on outright speculation to support his case against Trump and Truth Social. “Looking to the future, without proactive intervention, the Truth Social platform will likely lead to violations of Apple’s policies,” he wrote. Sounds like logic taken straight from the plot of Minority Report (2002). The film depicted a dystopian future where police use psychic technology to arrest people before they commit a crime — not after.

He also criticized Truth Social for a “lenient approach to content moderation,” which is a thinly veiled euphemism for saying Truth Social doesn’t like to censor people. “Recent history demonstrates that this lack of oversight can translate into the spread of dangerous disinformation, the coordinated mobilization of anti-democratic groups, and even the threat of violence,” the letter said.

CREW’s president applauded Apple for its previous censorship of right-leaning platforms and public figures, recalling the banning of Parler and InfoWars. “Today, Apple is once again positioned to set a positive example and to lead in corporate responsibility,” he beamed.

This was not the first time that tech giant Apple opted to censor, ban and destroy its ideological opponents. Apple CEO Tim Cook nearly tied himself in knots defending his company’s decision to ban the social media platform Parler after the events of Jan. 6, 2021. Cook attempted to portray the move as “a straightforward decision.”

Conservatives are under attack. Contact Apple HQ at (408) 996-1010 and demand that Big Tech uphold the First Amendment and free speech for all Americans.