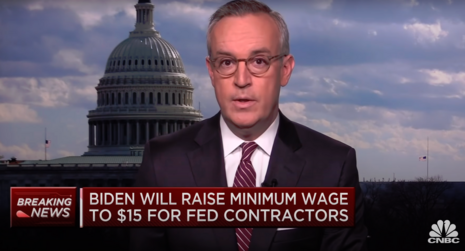 President Joe Biden announced a minimum wage hike to $15 per hour for federal workers, and naturally, The New York Times took the side of Big Government mandates.

This follows the bad economic news for Americans under the Biden regime: rapidly rising inflation, empty grocery store shelves and “a shrinking workforce.”

White House economists believe that the increase will not lead to significant job losses — a finding in line with recent research on the minimum wage — and that it is unlikely to cost taxpayers more money. They [also] argued that the higher wage would lead to greater productivity and lower turnover. [Emphasis added.]

These wonky “White House economists” and The Times must have missed the Congressional Budget Office (CBO) report that estimated a federal minimum wage increase would result in “1.3 million other workers … becom[ing] jobless.” Of course, The Times wasn’t the only outlet to back Biden and botch the numbers behind the CBO report.

The Times didn’t stop there, however. It continued to embarrass itself by citing “[a]n analysis by the liberal Economic Policy Institute [(EPI), which] estimates that up to 390,000 workers will directly benefit.” [Emphasis added.]

EPI is a far-left organization that has openly supported increasing the minimum wage for years. It made a particularly corrosive claim in a Jan. 26, 2021 article headlined Why the U.S. needs a $15 minimum wage:

Low wages hurt all workers and are particularly harmful to Black workers and other workers of color, especially women of color, who make up a disproportionate share of workers who are severely underpaid. This is the result of structural racism and sexism, with an economic system rooted in chattel slavery.

Unsurprisingly, however, EPI was funded by none other than the radical billionaire George Soros, according to Forbes. In fact, his Open Society Foundations gave $1,265,000 between 2017-19 alone, according to grant records. But the EPI Soros connections get even more obvious. EPI’s website lists President of the Institute for New Economic Thinking Robert Johnson as one of its board members and denotes that he previously “served as managing director at Soros Fund Management and Bankers Trust Company.” Yet, despite these connections, EPI still claims it is a “nonpartisan” organization. Imagine that.

The U.S. Office of Personnel Management also announced that federal civilian employees in the U.S. will be paid at least $15 an hour starting on Jan. 30, 2022.

Conservatives are under attack. Contact The New York Times at (855) 698-1152 and demand it stop running cover for the Biden administration’s bad economic policies.