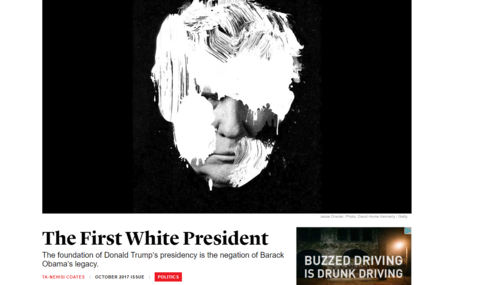 ‘The Atlantic’s’ Litany of Sins: Being White Is a ‘Bloody Heirloom'

Culture
Corinne Weaver
September 7th, 2017 11:20 AM
Race relations and identity politics are what drive some people to make some unbelievable judgments on the United States. Long before the Charlottesville incident in August, the left has slimed the right at racists and white supremacists. In The Atlantic, an essay by National Correspondent Ta-Nehisi Coates, with the headline, “The First White President,” was published this week. Coates, of course… 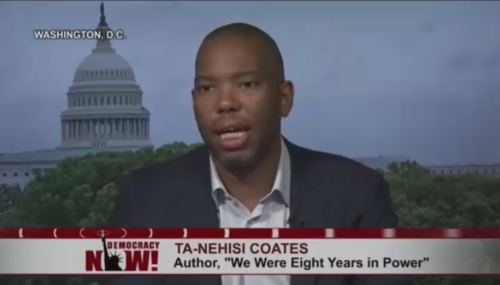 Culture
Corinne Weaver
August 15th, 2017 12:50 PM
When a lib turns on their movement’s idol, something must be very wrong indeed. So when Ta-Nehisi Coates blamed the Obama administration for allowing white supremacy to happen, one has to wonder if their common sense left them completely. Ta-Nehisi Coates, the race-obsessed National Correspondent for The Atlantic, gave an interview on August 15 to taxpayer-subsidized Pacifica Radio's Democracy… 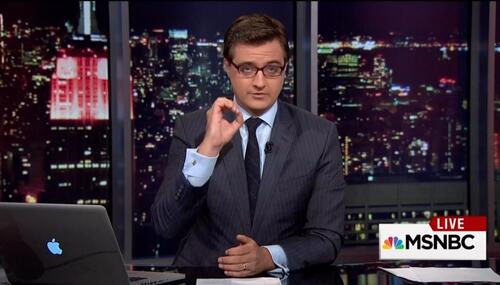 MSNBC host Chris Hayes has a new book coming out on March 21 called A Colony In a Nation. In a supportive summary published in The Week magazine, Ryan Cooper reports shocking arguments: that somehow Black Lives Matter are the new Founding Fathers in a America that's a tyrannical state, like a Soviet gulag for black people. 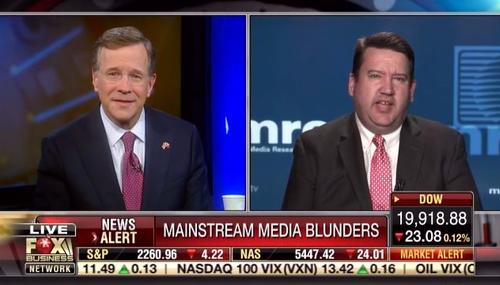 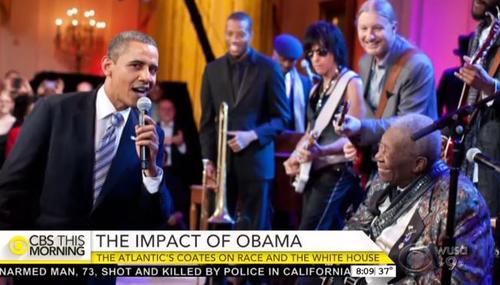 Journalist on CBS: ‘Racialized’ GOP Opposed Obama From the Start

Scott Whitlock
December 13th, 2016 2:27 PM
The hosts at CBS This morning on Tuesday brought on a fawning, pro-Barack Obama journalist to cement the legacy of the President. Atlantic national correspondent Ta-Nehisi Coates identified racism as a key reason for Republican resistance to Obama. 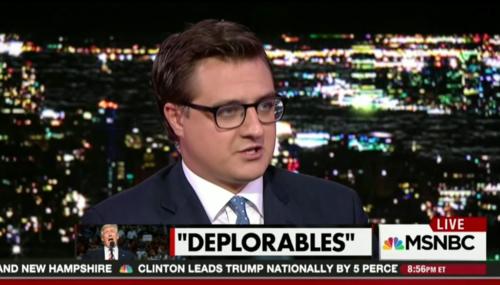 Brad Wilmouth
September 14th, 2016 8:15 AM
Liberal MSNBC host Chris Hayes made a surprising admission on his All In show during a discussion of the controversy around Hillary Clinton labeling half of Republican candidate Donald Trump's supporters as "deplorables," as she cited racism as one of their alleged faults. After he and guest Ta-Nehisi Coates of The Atlantic suggested that her claim against Trump voters had "merit," Hayes then… 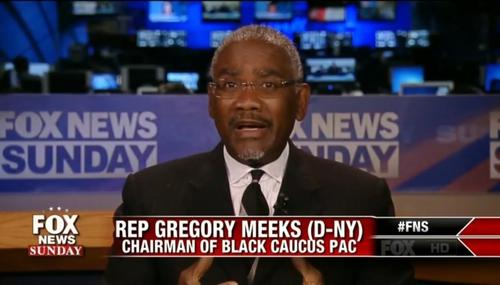 As GOP nominee Donald Trump attempts to draw black voters away from their decades-long allegiance to Democrats by accurately pointing out that African-Americans have little to show for their kneejerk support for the party, liberals will resort to creative interpretations of history to keep blacks in the fold. An example of this was seen on Fox News Sunday when host Chris Wallace was… 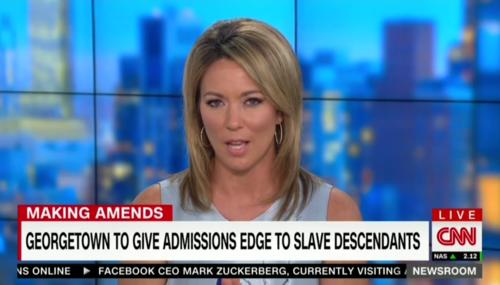 On Thursday's CNN Newsroom, host Brooke Baldwin devoted a segment to the decision by Georgetown University to grant what Baldwin referred to as "reparations" to make up for the school's history of owning slaves, with the school planning to enact several plans, including offering admission to descendants of slaves who were owned by the university. As Baldwin spoke to her guest, Maxine Crump --… 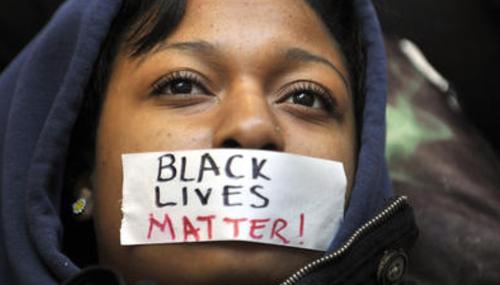 New York Times book critic Michiko Kakutani is notorious about letting her personal liberal politics infect her aesthetic judgment. In January 2009 she praised incoming president Barack Obama’s "love of fiction and poetry" that "imbued him with a tragic sense of history and a sense of the ambiguities of the human condition," as opposed to President George W. Bush's "prescriptive" reading that… 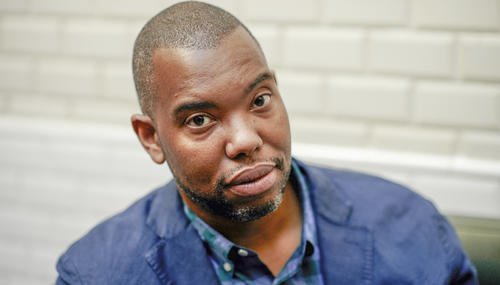 Ta-Nehisi Coates: Cops ‘Indistinguishable from Any Other Street Gang’

The Atlantic correspondent Ta-Nehisi Coates is getting wealthy race baiting with thoughtful-sounding writing liberals love to nod their heads to. The professional memoirist—who confessed no sorrow for the police and firefighters killed on 9-11 because, “they were not human to me”— turned his attention to the shootings in Dallas in a July 12 article. 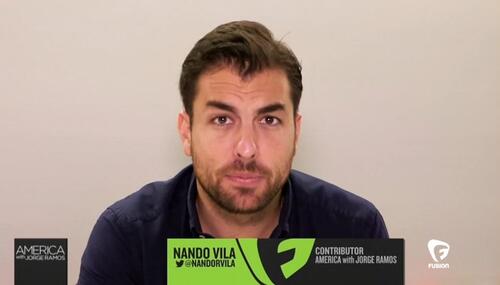 On Tuesday's America With Jorge Ramos, Fusion's Nando Vila advanced the left-wing cause of reparations to the descendants of slaves. Vila asserted "the moral case for reparations is a clear one. Black people are 16 times poorer than white people, because white people have systematically stolen wealth from black people for hundreds of years — through slavery, Jim Crow, housing discrimination,… 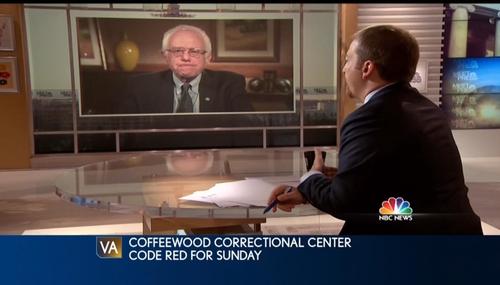 It's not easy to get to the left of Bernie Sanders.  He is a self-described socialist, after all. But hats off to Chuck Todd: he's managed to do it! On today's Meet the Press, Todd, citing Ta-nehisi Coates, challenged Sanders: why aren't you for reparations . . .  because of slavery for African-Americans when you're calling for economic justice on so many other levels? Why do you stop short on… 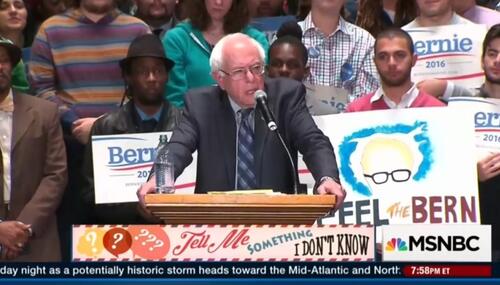 "By the way, I do believe in [slavery] reparations if you could figure out what it would be," Hardball host Chris Matthews admitted to his panel during the "Tell Me Something I Don't Know" segment on the January 20 program. 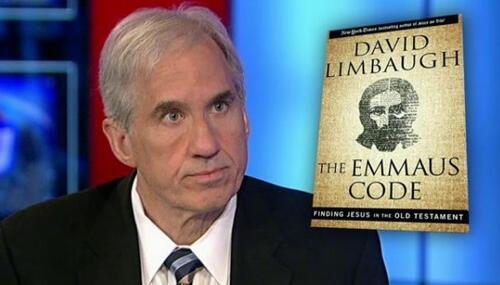 The Bible is the best-selling book of all time, but The New York Times would have to consign it to the ghetto for “Advice, How-To, and Miscellaneous” books. That’s what the Gray Lady has done to David Limbaugh and his new book, The Emmaus Code: Finding Jesus in the Old Testament. Paul Bedard at the Washington Examiner revealed that on the newspaper’s November 29 best-seller chart, the Times…