Nevertheless, leftists got extremely angry that Kessler would "obsess" over Alexandria Ocasio-Cortez mangling facts. Eric Alterman, who unintentionally wrote the Funniest Book of 2003 -- What Liberal Media? -- now complains that Kessler is obsessed in a romantic way with AOC. Er, when Kessler's written on her precisely once in 2019, and 12 times on Trump. The president is called out for 8,158 whoppers, and AOC is up, to what, three? (Salon complained about two in a six-month period last year.) 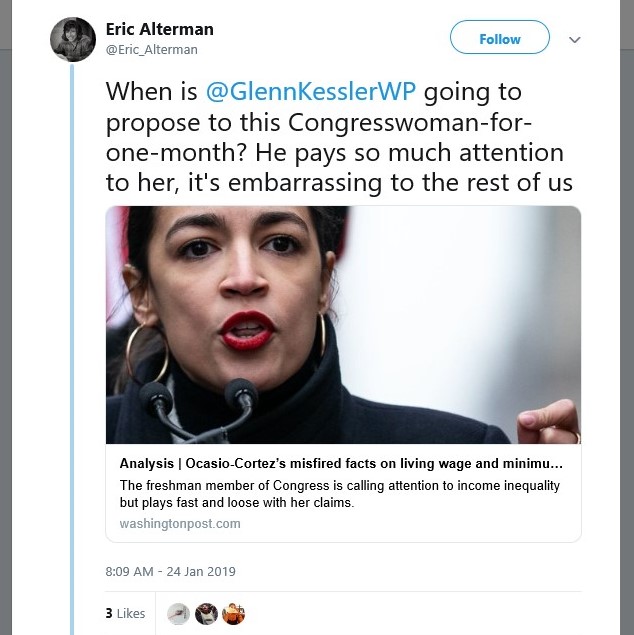 Is it just me, or does Alterman's personal attack on Kessler boomerang toward the Congresswoman, as if the only reason people would pay attention to her arguments is because they want to marry her?

Perhaps conservatives are too fixated on Ocasio-Cortez, but self-described socialists do draw attention. The same cannot be said for the "independent fact-checkers," who aren't fast to punish Democrats.

This is what Kessler focused on, a January 21 interview of AOC by fellow radical Ta-Nehisi Coates: "I think it’s wrong that you can work 100 hours and not feed your kids. I think it’s wrong that corporations like Walmart and Amazon can get paid by the government, essentially experience a wealth transfer from the public, for paying people less than a minimum wage.” Kessler gave that Three Pinocchios.

Kessler tried to give her credit for the "work 100 hours and not feed kids" part.

Ocasio-Cortez is on the mark — and even undersold the number. “A single-mother with two children earning the federal minimum wage of $7.25 per hour needs to work 135 hours per week, nearly the equivalent of working 24 hours per day for 6 days, to earn a living wage,” according to the MIT calculator.

But he cried "off the rails" at the Amazon/Walmart part:

Here’s where Ocasio-Cortez starts to go off the rails. Both Walmart and Amazon do pay more than the minimum wage. (Disclosure: Jeffrey P. Bezos, Amazon’s chief executive, owns The Washington Post.)

As of Nov. 1, Amazon pays at least $15 an hour to its hourly workers — even more in other places — and, in fact, supports efforts to raise the minimum wage. When Amazon made the announcement that it was raising wages, it even earned kudos from a longtime critic, Sen. Bernie Sanders (I-Vt.).

He gave credit  for her liberal sympathies, then added the But:

Ocasio-Cortez deserves credit for using her high profile to bring attention to income inequality. However, she undermines her message when she plays fast and loose with statistics.

Ocasio-Cortez fought back on Twittter, claming Kessler is using a "Walmart-funded think tank."

Kessler replied "she's wrong," that he had used Jason Furman, an Obama economist, who wrote a paper for the Center for American Progress, an unofficial think tank for the Democrats. 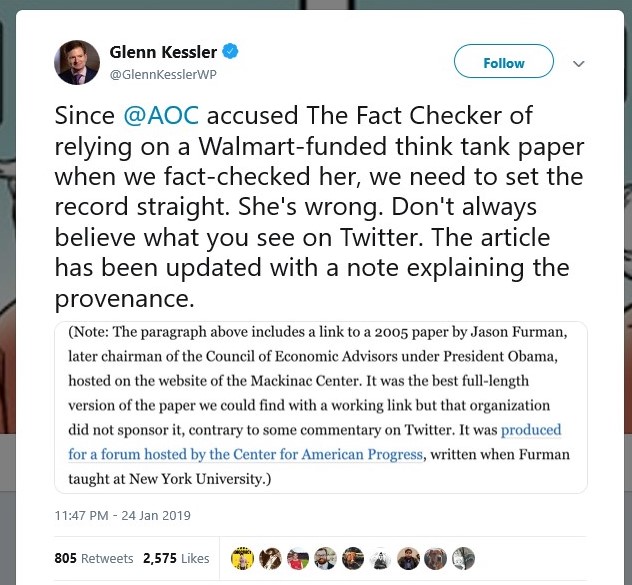 This is just the latest proof that Republicans are used to being attacked by the "objective" press and the Democrats absolutely freak out that they get even a fraction of the skepticism that the Republicans are getting.

The Daily Wire has a longer version of the AOC-Kessler Twitter battle.