This has to be the month's top entry in the "Just when you think you've seen it all" category — and it will be more than a little interesting to see how the nation's press handles it.

As the Associated Press reported a week ago, the City Council in Los Angeles, by a vote of 14-1, ordered the drafting of a law mandating a citywide minimum wage of $15 per hour by 2020, noting that "the support of Mayor Eric Garcetti virtually guarantee its eventual adoption." Now that it's almost a done deal, labor unions whose members earn less want to be exempt from the law. Seriously. And it's not that the unions were caught off guard, because the person who is most visibly arguing for the exemption "helps lead the Raise the Wage coalition"! Apparently caught completely flat-footed, three Los Angeles Times reporters, in a rare break from the paper's non-stop leftist bias, filed a fair and balanced report on the truly offensive situation.

In the process, organized labor may have tipped its hand as to what's really behind their national $15-per-hour minimum wage campaign — but only for everyone else (bolds are mine throughout this post): 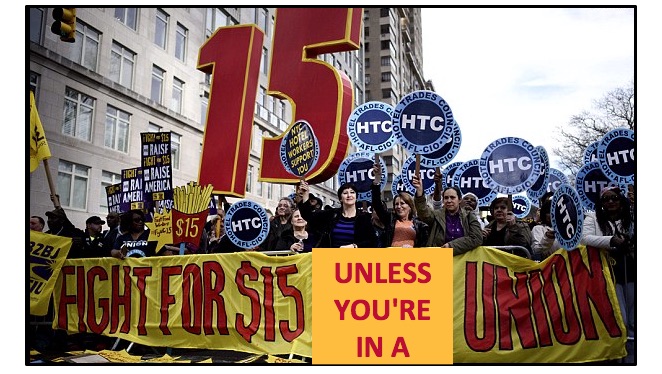 Labor leaders, who were among the strongest supporters of the citywide minimum wage increase approved last week by the Los Angeles City Council, are advocating last-minute changes to the law that could create an exemption for companies with unionized workforces.

... For much of the past eight months, labor activists have argued against special considerations for business owners, such as restaurateurs, who said they would have trouble complying with the mandated pay increase.

But Rusty Hicks, who heads the county Federation of Labor and helps lead the Raise the Wage coalition, said Tuesday night that companies with workers represented by unions should have leeway to negotiate a wage below that mandated by the law.

"With a collective bargaining agreement, a business owner and the employees negotiate an agreement that works for them both. The agreement allows each party to prioritize what is important to them," Hicks said in a statement. "This provision gives the parties the option, the freedom, to negotiate that agreement. And that is a good thing."

Coalition representatives said the proposed exemption would ensure the city complies with federal laws which they say give collective bargaining agreements precedence over local ordinances. They also contend that it would keep L.A.'s ordinance consistent with previous city wage laws.

Some business leaders criticized the proposal, however, calling it ironic in light of union leaders' past opposition to special considerations for some employers.

"I'd refer everyone back to the statements of labor leaders over the past seven months that no one deserves a sub-minimum wage," said Ruben Gonzalez, senior vice president for public policy and political affairs with the Los Angeles Area Chamber of Commerce, which opposed the minimum wage increase passed by the City Council.

Gonzalez said the change sought by labor officials could pressure companies into letting employees unionize as a way to seek relief from the mandated wage hike.

Let's try to translate the contentions of Rusty Hicks and "coalition representatives":

Yours truly and several others have been pointing out since late last year that many of the unions financing the OUR Wal-Mart and "Raise the Wage" movements targeting Wal-Mart and the fast-food industry represent workers at very large companies, e.g., Kroger, who are paid far less than even $10 an hour. Their attempt to exempt themselves from LA's minimum-wage law is a brazen admission that they want to preserve workplace arrangements for their members which they consider totally unacceptable for everyone else.

The LA Times story came out early this morning Pacific Time. As of when this post was prepared, Time.com and Slate.com were among a very few establishment press sites which have taken notice.

At Slate, Jordan Weissman twisted himself like a pretzel defending the unions' move:

To be clear, this is almost surely an implicit acknowledgment by the unions that there are at least some local industries in Los Angeles, such as apparel manufacturing, where $15 per hour is too high a minimum, and workers might prefer to accept lower pay in order to keep their jobs. Otherwise, there would be no point to pushing for it. No rational employee would choose to organize and accept a lower paycheck—plus pay union dues—unless they really, truly thought their job was being imperiled by their wage. Admitting that $15 wasn't a great fit for every sector of L.A.'s economy probably wouldn't have been politically convenient in the early stage of the lobbying campaign. But now that the new minimum seems close to becoming a reality—the City Council has voted in favor of it in principle, but needs to approve final legislative language—it can't hurt to give workers and businesses a safety net if they need it.

In other words, "Now that it's almost a law, we can reveal the true motivations we've been hiding for months."

LA Mayor Garcetti, according to MyNewsLA.com, "is open to studying an idea to exempt workers with union contracts from the city’s proposed $15 per hour minimum wage ordinance."