On May 5, PolitiFact's Louis Jacobson kept with the alleged "fact-checking" web site's actual role as pack of leftist hacks by issuing a fundamentally dishonest "Half True" ruling on a statement made by CarlyFiorina.org's cybersquatter. I raise the matter now because the web site's critics, while raising most of the relevant points, haven't gone far enough in tearing apart Jacobson's work.

As his headline states, the cybersquatter "accuses Carly Fiorina of wishing she'd laid off 30,000 employees more quickly" during the Republican presidential candidate's tenure as Hewlett-Packard's CEO which ended a decade ago. The squatter is lying. She didn't make that statement in connection with HP's layoffs. That should have been the end of it, but Jacobson still pretended that the lie is "Half True" in his evaluation.

Fiorina's "I would have done them faster" statement appeared In a 2005 Fortune magazine article. That statement referred only to the speed at which she fired certain key executives, and not to the number of layoffs which occurred at HP during her tenure (bolds are mine throughout this post): 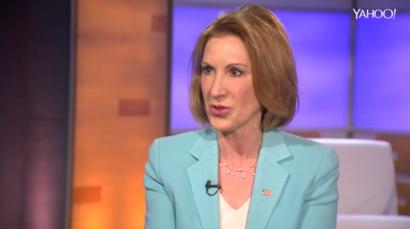 ... Fiorina summarily fired — within hours — the head of enterprise sales, Peter Blackmore, and two of his senior executives. The speed and visibility of the move caused the tech industry to view the firings as an unnecessarily cruel public hanging, and criticism of Fiorina flared. She argues back, saying that a hanging it wasn’t and that in truth these people were treated, in the usual HP manner, with ‘respect, candor, and compassion.’ But she also says that some of the European problems had been ripening for a time and that these three very senior executives clearly ‘dropped the ball.’ She believes in accountability, she says, so the men are gone. ...

... Under Fiorina (HP) has lost — via firings, resignations, and retirements — a noticeable number of its top people. Here’s one indicator of what some people call the ‘brain drain’: Of the 11 ‘direct reports’ that Fiorina had in October 2003, one died and five others are gone. Michael Capellas, CEO of Compaq when the merger was done, left early. Former HP employees can also, without much effort, list another 20 well-placed executives who have departed, a few of them going to competitors Dell and storage company EMC.

Fiorina does not agree, naturally, that there’s been a brain drain. In fact, she believes that one lesson she’s learned while running HP is that she should have moved more quickly in ejecting certain people. Smartened up now, she says, "I would have done them all faster. Every person that I’ve asked to leave, whether it’s been clear publicly or not, I would have done faster."

Reacting to the above verbiage at Fortune, Jacobson wrote:

But did Fiorina say that she wishes she’d done those 30,000 layoffs "faster"? This is more problematic.

This puts Fiorina’s comment in a somewhat different light. Rather than musing that she should have laid off 30,000 people faster, the full article suggests she’s referring to a select group of high-ranking executives.

No sir. It's not "problematic" at all. The very idea that Jacobson could have considered the matter "problematic" is absurd. The full Fortune article makes it obvious that she's only referring to those executives. There's no other conceivable interpretation of that comment.

In fact — and this is a point other critics of Jacobson have either missed or chosen not to emphasize — the Fortune writeup by Carol J. Loomis makes absolutely no reference to generalized layoffs. Thus, there is no way anyone can tie Fiorina's "I would have done faster" statement to H-P's 30,000 layoffs.

Another point: A May 2003 item at SFGate.com, written a year after H-P's Compaq acquisition-related layoffs, reported that "many laid-off HP workers say the company offered generous severance packages and gave them nine weeks to look for another job within the firm." In other words, though layoffs are hardly pleasant, it isn't as if HP threw their employees on the street with their last paycheck in hand and said, "Good luck with the rest of your life."

Half True – The statement is partially accurate but leaves out important details or takes things out of context.

Mostly False – The statement contains some element of truth but ignores critical facts that would give a different impression.

False – The statement is not accurate.

Fiorina's cybersquatter started with a known fact — the 30,000 layoffs — and dishonestly tied something she said to that fact, even though it had nothing to do with that fact. Therefore, the cybersquatter's statement is false.

PolitiFact says that the cybersquatter's statement — (as headlined) "Carly Fiorina) wishes she’d done those 30,000 layoffs 'faster'" — is Half True only because that statement contains a known fact. By that measurement, I could write that "the sun rises in the east because it completely rotates around the earth every 24 hours," and PolitiFact would, to be consistent, be forced to rate my utterly false and wacky claim Half True.

In other words, PolitiFact has rendered itself utterly useless, except as an amazing example of how a bunch of people who have become a national laughingstock actually think they are so smart and important.