Add the following to the "you will be made to care" stories Erick Erickson at RedState began to recognize several years ago.

Those who think that legalizing same-sex "marriage" won't affect them should have received a wake-up call on Tuesday during arguments at the Supreme Court over inventing a constitutional right for two people of the same sex to have such an arrangement. Most of them didn't get it, because, with only one exception I could find, the establishment press covering the proceedings perfectly understood the gravity of the discussion and its implications — and refused to report it, because doing so would give away the Obama administration's, and the left's, ultimate game plan.

The exception was at the Washington Post, via Sarah Pulliam Bailey at the paper's Acts of Faith blog. Even then, Get Religion's Terry Mattingly reports that Bailey's work didn't make the "ink on paper" edition.

Here's Bailey's coverage of what was arguably the most important question of the day: 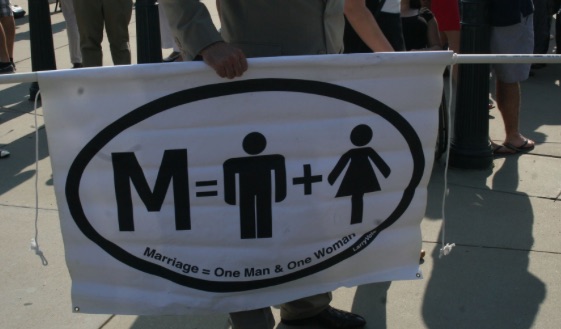 During oral arguments, Justice Samuel Alito compared the case to that of Bob Jones University, a fundamentalist Christian university in South Carolina. The Supreme Court ruled in 1983 the school was not entitled to a tax-exempt status if it barred interracial marriage.

Here is an exchange between Alito and Solicitor General Donald B. Verrilli Jr., arguing for the same-sex couples on behalf of the Obama administration.

Justice Alito: Well, in the Bob Jones case, the Court held that a college was not entitled to tax­exempt status if it opposed interracial marriage or interracial dating. So would the same apply to a 10 university or a college if it opposed same­-sex marriage?

... Justice Antonin Scalia asked attorney Mary L. Bonauto, who is representing gay couples in the case, whether it is it conceivable that a minister could decline to marry two men if indeed the Supreme Court holds that they have a constitutional right to marry.

“No clergy is forced to marry any couple that they don’t want to marry,” Bonauto said. “We have those protections.”

The first point is that the Obama administration's lawyer has admitted that if the "right" to same-sex "marriage" is deemed to be in the Constitution, any institution whose religious belief flouts the Constitution as interpreted will see their tax-exempt status placed in jeopardy, subject to loss at the hands of anyone who chooses to litigate the matter. The tax-exempt status of dissenting churches won't be an "issue" for long.

The tax-exempt status of churches which stick with their traditional beliefs on marriage in the wake of such a ruling won't be an "issue" for the left. Instead, their elimination will become a goal.

No one should have a reasonable doubt at this point that the left's goal here is to force compliance and to persecute those who won't. But in case there is anyone out there who still does, let me take you to a column at the New York Times by Frank Bruni written earlier this month (HT Breitbart):

... homosexuality and Christianity don’t have to be in conflict in any church anywhere.

That many Christians regard them as incompatible is understandable, an example not so much of hatred’s pull as of tradition’s sway. Beliefs ossified over centuries aren’t easily shaken.

But in the end, the continued view of gays, lesbians and bisexuals as sinners is a decision. It’s a choice. It prioritizes scattered passages of ancient texts over all that has been learned since — as if time had stood still, as if the advances of science and knowledge meant nothing.

... So our debate about religious freedom should include a conversation about freeing religions and religious people from prejudices that they needn’t cling to and can indeed jettison, much as they’ve jettisoned other aspects of their faith’s history, rightly bowing to the enlightenments of modernity.

“Human understanding of what is sinful has changed over time,” said David Gushee, an evangelical Christian who teaches Christian ethics at Mercer University. He openly challenges his faith’s censure of same-sex relationships, to which he no longer subscribes.

... Religion is going to be the final holdout and most stubborn refuge for homophobia. It will give license to discrimination. It will cause gay and lesbian teenagers in fundamentalist households to agonize needlessly: Am I broken? Am I damned?

... And (“God and the Gay Christian” author Matthew) Vines said that the New Testament, like the Old Testament, outlines bad and good behaviors that almost everyone deems archaic and irrelevant today. Why deem the descriptions of homosexual behavior any differently?

Creech and Mitchell Gold, a prominent furniture maker and gay philanthropist, founded an advocacy group, Faith in America, which aims to mitigate the damage done to L.G.B.T. people by what it calls “religion-based bigotry.”

Gold told me that church leaders must be made “to take homosexuality off the sin list.”

What if your church won't take homosexuality off the sin list should the Supreme Court invent a constitutional right to same-sex "marriage"? Well, first you lose your tax-exempt status.

And if even then you won't marry two same-sex people in your church? Well, you'll be fined and/or arrested, because you have violated the parties' now-inviolable constitutional rights.

Is there anyone out there who still thinks they won't be made to care?

Sadly, many people don't see what's coming, thanks to a national establishment press corps which has clearly been on the side of the radical left in these matters for almost two decades, if not longer.

A search at the Associated Press's national site on "tax exempt marriage" (not in quotes) returns nothing.

A Google News search on "Alito marriage tax exempt" (not in quotes, sorted by date, with duplicates) returned about 35 items, none of them establishment press outlets — although I should note that the Washington Post item flagged earlier somehow didn't get listed, even though it somehow got listed in a "relevance" search.