At USA Today Friday afternoon, two of its reporters came down on the side of Brian Williams in the controversy over what even the often media-enabling Associated Press has called his "fake Iraq story."

Roger Yu tried to portray Williams as a victim of a "synergistic stretch" who is now having to defend himself against the "firestorm on the Internet and social media," while Marisol Bello, who covers "breaking news, poverty and urban affairs," wrote that "there are reasons that it's plausible" that "Williams would remember riding in a helicopter that was shot down if he was nowhere near it."

Yu came perilously close to saying that Williams is (and perhaps even should be?) untouchable, and expected us to hold a pity party because of the awful burden of apparently being coerced into becoming a "personality" (bolds are mine throughout this post):

Williams' popularity, ratings could save his job 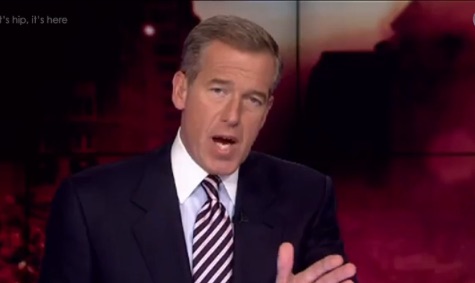 Beyond being the most popular evening network news anchor, Brian Williams is a brand.

The 55-year-old newsman routinely yucks it up with David Letterman and Jimmy Fallon on the talk show circuit. He's made self-deprecating appearances with Tina Fey on 30 Rock.

It was this synergistic stretch that may have triggered his biggest professional crisis. It may also possibly save his career.

So Williams was apparently forced to tell his war story on Letterman, and to "slow jam" the news with Fallon. That's the real problem, you rubes, not the lie itself.

... Journalists have been known to occasionally exaggerate their exploits. But Williams' misstatements have unleashed a firestorm on the Internet and social media, with some critics calling for his firing and others more tolerant of Williams' account that it was simply a matter of "misremembering."

The seething reactions also speak to the jarring oddity of an evening network news anchor — fading in influence as a group, but still the most visible paragon of trust and journalistic integrity — caught in a lie that seems beneath his position.

"The job of network anchorman has been extended to other things," says Andrew Tyndall, who monitors evening news shows on TyndallReport.com. "The reason why he got into this trouble is because his job description is shifting. He's had to become a personality."

Again, did anyone force Williams to do these things? From here, it seems that he relished these opportunities to "become a personality."

Here's more, where it gets really, really deep:

... For the vast majority of Millennials and others who have never known the tradition of watching the evening news, Williams' tribulation may seem a trifling affair. ...

... The nature of Williams' fib will also be weighed in NBC News' decision, Tyndall says. Williams wasn't guilty of inaccurate or deceptive reporting, but rather embellishing a personal story.

... Rosenstiel noted that Williams' body of work should be accounted for in deciding his future. "This is not a pattern, and I think that matters," he says.

There are at least three problems here.

One is Yu's reference to a CNN report in unexcerpted text. CNN originally reported that a helicopter pilot claimed that Williams' helicopter "did take fire, though it wasn't hit." The pilot is now "backtracking."

The second is that the NBC anchor's tall copter tale is beginning to look an awful lot like part of a "pattern." Problems with his reporting from New Orleans during Hurricane Katrina have emerged. Additionally, Williams can't seem to remember whether he saved one puppy or two from a house fire during his days as a volunteer firefighter.

The third has emerged in the past 24 hours. Hot Air links to a CNN report, and summarizes its key allegation:

... the original report from NBC News in 2003 ... includes radio chatter about taking small-arms fire. (Stars and Stripes reporter Travis) Tritten ... says that one of the three witnesses, Joseph Miller, says that the chatter actually came from another unit — which means that NBC News edited it into the Williams footage to match his story about coming under fire.

Over at PJ Media, Ed Driscoll, in light of the network's ugly George Zimmerman history, drily asked (link in original, and that's his sarcastic misspell): "NBC futzing with audio timeline to distort a story? That’s umpossible!"

It seems hard to believe that NBC News anchor Brian Williams would remember riding in a helicopter that was shot down if he was nowhere near it, but there are reasons that it's plausible.

Ask Elizabeth Loftus, a psychologist who pioneered the study of false memory — what happens when people remember things that didn't happen or remember them differently than how they happened.

She has conducted hundreds of experiments on more than 30,000 people over the past 40 years. She has found that a person's memory is highly susceptible to suggestions or insinuations from conversations with other people or from watching, reading or listening to news stories.

Oh, and speaking of "suggestions," here's a really strong one, reported at Variety on Thursday morning (i.e., a day before Bello's "false memory" riff appeared), and directly headlined as follows at Townhall:

In other words, even if Williams had developed "false memories," the execs allegedly told him that his story was a load of horse manure, and to stop telling it. If that's indeed the case, he clearly refused.

On that basis, there's really no point in wasting time with the rest of Marisol Bello's bellowing.