More on the 'Myth' of 'No-Go Zones,' Which Were Recognized Even Before the 2005 European Riots

Earlier today (at NewsBusters; at BizzyBlog), I posted on the establishment press's apparent determination to punish anyone who dares to mention the existence — in their view, the "myth" — of "no-go zones" in France and other European countries.

The tactic seems to be working. The Washington Post's Erik Wemple, who criticized CNN for allowing guests to use the term and failing to challenge them after the Charlie Hebdo massacre, is now praising the network, particularly Anderson Cooper, for backing away, even though one of those guests was a "former CIA official" who, it would seem, would have been asserting his position about their existence based on job experience and other acquired knowledge. Before the term completely disappears down the memory hole, readers should be reminded that it was being used even before the 2005 riots in Europe.

Here's Newsweek, reporting on November 20, 2005, shortly after the worst of the rioting had subsided (italics are theirs; HTs to an emailer and Pamela Geller; bolds are mine throughout this post):

... In hundreds of French housing projects and ghettoes populated by mostly Muslim Arab and African immigrants and their French children and grandchildren, "normal" has been for years a sort of chronic intifada, even if it was invisible to most of France and the rest of the world. According to research conducted by the government's domestic intelligence network, the Renseignements Generaux, French police would not venture without major reinforcements into some 150 "no-go zones" around the country--and that was before the recent wave of riots began on Oct. 27. In France's "immigrant" neighborhoods, to borrow a phrase from the American military, "situation normal, all f---ed up."

Belatedly, French Prime Minister Dominique de Villepin invoked a law left over from the French fight to hold onto Algeria 50 years ago that allows local governments to declare curfews. No-go zones would not be allowed, he said.

Villepin, perhaps better known to many readers as the guy whose histrionics at the U.N. were largely credited with the Bush administration's failure to win an Iraq War resolution there, was basically admitting that such no-go zones were allowed before. As shown in my previous post, their at least informal but still ugly existence was acknowledged by longtime Parisian David Morrison just two weeks ago at the New Republic shortly after the Charlie Hebdo massacre ealier this month.

Adding to the current hypocrisy, showing yet again that the "all the news that's fit to print" outlet, which has criticized Fox News for using a term it employed for years, there's this simultaneously prescient and ignorant item from David Ignatius at the New York Times in April 2002, 3-1/2 years before the riots:

...  the ethnic tensions that have given rise to (the National Front's Jean-Marie) Le Pen will continue.

The political class does not seem to grasp that Le Pen's success is a wake-up call, a sign that the country is failing to deal with its burgeoning problems of race and violence. It is as if the French imagine that race is a worry for other nations (the United States, in particular) but not for them. Yet Arab gangs regularly vandalize synagogues here, the North African suburbs have become no-go zones at night, and the French continue to shrug their shoulders.

France increasingly has the edgy, polarized feeling of American cities in the '60s and '70s. Look into the eyes of Arab immigrants and you will often see a smoldering rage. Riding the Paris Métro, you feel the tension as prosperous French people edge away from noisy gangs of teenagers. Talking to French friends, you hear tales of ethnic attacks in public schools. And yet the country officially pretends that it doesn't have a race problem.

It is often futile to suggest that France might have anything positive to learn from the American experience, but in this case it truly does.

The problem in France is that informal control of many of the banlieues appears to be in the hands of those who have no interest in assimilating into French society, or even in recognizing the precedence of France's laws over their "law," known as sharia.

There's a final aspect of the "no-go zone" controversy, raising the practical, everyday question of whether one would ever want to "go" into an area where leaving your car unattended for even a short time period leads to a reasonable chance that you'll find it torched upon your return. 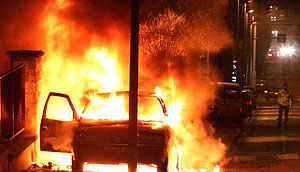 ... police and insurance officials indicate that somewhere between 42,000 and 60,000 automobiles are intentionally torched in France every year. The majority of those go up in smoke in or near the disadvantaged suburban housing projects located outside most French cities (i.e., the banlieues -- Ed.).

The low end of the more current estimate Crumley quoted means that 115 cars per day are being torched. A population-adjusted equivalent in the U.S. would be about 450 per day. All of this wanton destruction is apparently so routine that the press in France and the rest of the world almost never covers it — except on New Year's Eve, when the one-day volume of vehicles burned in recent years has averaged over 1,000.

So it would seem to be quite foolish to risk your car by bringing it into the banlieues, or to risk your personal safety by having to travel significant distances within the banlieues on foot. Therefore, the banlieues represent places where non-residents wouldn't want to go, making them "no-go zones" in the most basic sense.

No amount of media pretense or memory hole treatment will change that sad reality, while deliberately failing to acknowledge it arguably encourages and perpetuates it.