Former New York Governor Mario Cuomo, who died on Thursday, is predictably being lionized today by USA Today's Aamer Madhani "as (a) giant in political rhetoric," and by others elsewhere in similarly glowing terms.

Madhani goes on to characterize the three-term Empire State chief executive's 1984 Democratic Convention speech in San Francisco as "what is widely considered one of the finest pieces of political rhetoric in recent memory." That it probably was. But he also calls it "a full-throated rebuttal of President Ronald Reagan, who would go on to a landslide victory over the Democratic nominee Walter Mondale." On that, Madhani is absolutely wrong. It was an attempt at a rebuttal which has since been thoroughly refuted and discredited.

When Cuomo gave his speech, the Reagan recovery, which began in November 1982, was less than two years old.

The economy Reagan inherited and had to turn around was indeed grim. As Peter Ferrera described it at Forbes in 2011 (bolds are mine throughout this post):

When President Reagan entered office in 1981, he faced actually much worse economic problems than President Obama faced in 2009. Three worsening recessions starting in 1969 were about to culminate in the worst of all in 1981-1982, with unemployment soaring into double digits at a peak of 10.8%. At the same time America suffered roaring double-digit inflation, with the CPI registering at 11.3% in 1979 and 13.5% in 1980 (25% in two years). The Washington establishment at the time argued that this inflation was now endemic to the American economy, and could not be stopped, at least not without a calamitous economic collapse. 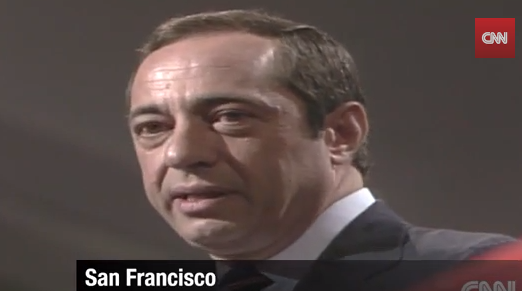 President Reagan campaigned on an explicitly articulated, four-point economic program to reverse this slow motion collapse of the American economy:

4. Deregulation, which saved consumers an estimated $100 billion per year in lower prices.

These economic policies amounted to the most successful economic experiment in world history.

How successful? Reagan's prescriptions, though watered down during Bush 41's presidency (leading to a brief recession) and then again during the Bill Clinton era (by tax increases which only partially offset Reagan's cuts), dominated the next quarter century, which was “the greatest period of wealth creation in the history of the planet.”

Cuomo in 1984 was determined to frame Reagan's policies in rich vs. poor, haves vs. have-not terms. His contentions seemed credible to many at the time, but only because, as noted earlier, the recovery was in its early stages. But those contentions have no credibility now because everyone got richer, as the following chart from Pew Research, whose title tries and fails to make the opposite argument, clearly shows:

Unfortunately, Reagan's policies have been completely reversed. That reversal began in the spring of 2008, when it became clear that Democratic presidential nominee Barack Obama would likely become the country's next president, and would be working with a Democratic Party-dominated Congress.

As I noted in a column which coincidentally appeared elsewhere yesterday (links are in original):

During the past six-plus years ... most Americans have become decidedly poorer.

... the current administration’s implementation of spendthrift, business-hostile, market-controlling, intrusive, high-regulation policies in the years following Barack Obama’s election to the presidency brought all of that to a screeching halt. Median household wealth seriously declined in all income classes during the next three years. During the most recent three-year period, the Obama-era “recovery” has continued to harm lower-income households, done absolutely nothing for those in the middle, and benefitted only households with higher incomes.

A further dive into the Fed’s (Federal Reserve's) underlying report indicates that only the group comprising the top 10 percent of income-earning households has experienced an increase in wealth.

Yet the left and the press continue to ridicule the “trickle-down” policies which, when implemented, led to greater wealth for everyone, while lionizing the past half-dozen years of Keynesian calamity which has enhanced the position only of those at or near the top.

The left and the press (but I repeat myself) won't ever admit the inconvenient truth about Cuomo's 1984 speech, namely that the policies he intensely opposed with fabulous rhetorical flourishes ended up working, and helped the very people he believed would be left behind. What he favored then, since implemented with fervor during the past six years, has had the opposite effect — undoing the improvements seen under Reaganomics for all but the very well-off.