St. Louis Post-Dispatch reporter Nick Pistor has quite an odd take on Dorian Johnson, the closest eyewitness to the killing of Michael Brown by Ferguson, Missouri police officer Darren Wilson in early August.

The occasion enabling Pistor to publicly purvey his perception was news on Monday that Johnson had taken a job with the City of St. Louis. Before getting to those details, let's look at Pistor's astonishing opening paragraph (bolds are mine throughout this post):

Dorian Johnson, who rose to fame as a witness to Michael Brown's fatal encounter with Ferguson police officer Darren Wilson, has been hired to do work for the city of St. Louis.

"Rose to fame"? How about "became infamous"?

A montage of key figures in the Brown killing at the Post-Dispatch (click through to number 4 at the link) describes Johnson as follows:

Johnson, 22, was walking with Brown when they encountered Wilson. Johnson was with Brown during the incident a short time before at the Ferguson Market and Liquor.

Johnson told reporters that Wilson ordered them to stop walking in the street and cursed them. Johnson said the officer reached out of his vehicle window and grabbed Brown by the throat and then arm, and one shot was fired as they struggled. Johnson said he and Brown then ran. He said Wilson got out of his car and fired again, hitting Brown, who then turned and raised his hands in the air before Wilson fired the fatal shots, according to Johnson. His statement is the origin of the protesters' chant of "hands up, don't shoot."

Thus, neither Pistor nor the Post-Dispatch will acknowledge that Johnson's "hands up" claim was a lie. The related forensic evidence shows that Johnson lied.

Johnson is the most prominent and obvious among the many untruthful witnesses whose false testimony the Darren Wilson grand jury had to sort through in getting to the truth and ultimately deciding, based on that truth, not to indict Wilson.

If that constitutes "fame" and not "infamy," our whole world has been turned upside down.

Darren Wilson's friends are not taking it lying down. The UK Daily Mail — as usual, we see the British press doing the job American journalists won't do — is reporting that they want Johnson indicted for perjury: 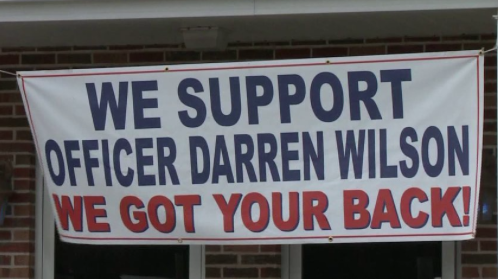 Close friends of Darren Wilson have called for the star witness in the Michael Brown shooting to be charged for lying about what he saw.

Two of the Ferguson police officer’s best friends told MailOnline that Dorian Johnson - who was next to Brown at the time - should be arrested for his statements in numerous TV interviews he made days afterwards.

They say that he made up the claim that Brown had his hands up which kickstarted the ‘Hands up, don’t shoot’ protest movement.

For his part Johnson told the grand jury that the whole process has left him feeling ‘victimized’.

He also revealed that the altercation began because he didn’t like how Wilson spoke to him like a father telling off his son.

Johnson was walking with Brown back to his house in Ferguson, Missouri, when he and Wilson got in tussle that ended in tragedy on August 9.

The killing sparked more than a week of violent protest and trouble erupted again this week with looting and widespread vandalism when a Grand Jury decided not to indict Wilson.

The decision effectively means they did not believe Johnson’s account.

Afterwards, Wilson’s testimony was made public which his supporters say proves Johnson was a liar.

Predictably, and despicably, the left's solution for the "hands up, don't shoot" lie is to say that whether or not Brown's hands were up is irrelevant, because of the importance of the "larger message."

Jeff Rainford, Mayor Francis Slay's chief of staff, has confirmed that Johnson was hired under a state grant through the city's Agency on Training and Employment, or SLATE.

Officials said he is doing work for the city. The job, listed as a temporary position, pays about $8.50 an hour.

Johnson, 22, was with Brown at Ferguson Market and Liquor when Brown stole a box of Swisher Sweets cigarillos and shoved a store employee. Johnson was walking with Brown when they were stopped in the street by Wilson.

Officials have said Johnson will not be charged in connection with the cigarillo incident.

So that would appear to make at least two criminal charges Johnson has thus far dodged, and probably ultimately will dodge.

I certainly hope that Mr. Johnson capitalizes on his unbelievably lucky breaks to make something of himself. But as to Nick Pistor's assessment that Dorian Johnson "rose to fame" and presumably remains there, well, the last time I checked, genuinely famous people aren't mired in low-wage temporary jobs paying well below what President Obama believes is an acceptable minimum wage.