Lisa Bloom describes herself as a "Fighter for justice at my law firm, The Bloom Firm," and is "legal analyst for NBC News & Avvo."

NBC and Avvo should seriously reconsider their relationships with Ms. Bloom. In a series of tweets on Tuesday, she seethed over the grand jury's failure to indict Darren Wilson in the shooting death of Michael Brown in Ferguson, Missouri. Since then, she's been a whirling dervish of dementia over "#WhitePrivilege." First, let's look at the crucial Tuesday tweets which exposed Bloom's fundamental dishonesty about Ferguson:

If what Bloom alleges is true, it would indeed be astonishing. Really, calling a human being "it" with no reaction from the prosecutor or the presiding judge?

But of course, that's not what happened, as the Associated Press and more other news outlets than can be counted have reported:

Wilson said he managed to pull the trigger, and the gun "clicked" twice without firing before a shot went through the window. Wilson said Brown stepped back and then looked at him with the "most intense, aggressive face."

"The only way I can describe it, it looks like a demon, that's how angry he looked. He comes back towards me again with his hands up."

Obviously, Lisa Bloom, Darren Wilson was referring to Michael Brown's face, not his personhood. Bloom, in not revealing what Wilson actually said, was either being incredibly ignorant or incredibly deceptive.

Others, in comments gathered at Twitchy, are appropriately outraged (bolds are mine):

"Lisa, he was referring to MB's face. As you well know."

"FYI, the 'it' Darren Wilson was referring to was the look on Brown’s face. That is an 'it' you disgusting hack."

"left out half of the quote, hoping to incite rioters. That is criminal."

Caught red-handed, Bloom, who late Thursday retweeted someone else's declaration of "No indictment, no peace," has spent much of today tweeting about how lucky she is to supposedly have "white privilege" and attempting to perpetuate her original lie. Here is a sample: 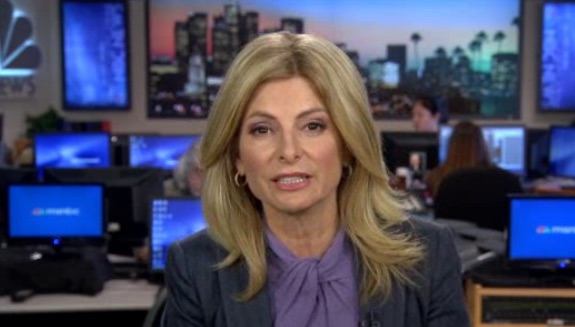 "Not ever being called an "it" #WhitePrivilege"

"Not ever having my mad face construed as aggressive or demonic. #WhitePrivilege"

"Being allowed to make stupid, even criminal mistakes as a teen and no one ever suggesting I deserved to be shot for it. #WhitePrivilege"

"The many times in my life I've talked cops out of ticketing or arresting me. #WhitePrivilege"

"Knowing that no matter how many people of my skin color commit heinous crimes, I will not be guilty by association. #WhitePrivilege"

Lisa Bloom can whine all day and night about how she's lucky to have and doesn't deserve her "white privilege." But nothing will change the fact that she deliberately distorted Darren Wilson's testimony to incite anger in the ignorant. Shame on her.