House Minority Leader Nancy Pelosi and Aaron R. Hanlon, an infrequent columnnist at Salon, both have an excuse for Democrats' poor performance in this year's midterm elections: pervasive voter suppression.

You see, the left's new working definition of "voter suppression" — a definition which is never a subject of establishment press scrutiny — is apparently the following: "Many of the people who would ordinarily support us didn't register to vote, and many of our supporters who did register didn't bother to cast a ballot. Ergo, their vote was suppressed." 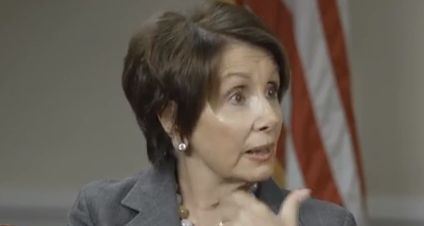 Pelosi's contention, captured at the Washington Times on Wednesday — and, as usual, reported almost nowhere else — is across the board:

House Minority Leader Nancy Pelosi asked her fellow Democrats to keep her on as their leader in the new Congress next year, saying she still has unfinished goals she wants to accomplish.

She said the chief message she took from Tuesday’s election, which saw Democrats eviscerated at all levels, is that voter suppression was a problem.

“To succeed, we must inspire, educate and remove obstacles to participation. Only by changing our political environment and broadening the universe of the electorate can we build a strong sense of community and an economy that works for everyone,” she said.

Pelosi's invocation of "universe" and "community" appears to be betray a uniquely far-left belief that also appears to have driven President Obama's de facto assertion that he — and apparently he alone — represents the two-thirds of Americans who didn't vote this time out. The left really wants "universal registration," and apparently will cry "voter suppression" until it arrives. As J. Christian Adams explained at PJ Media on Thursday:

If you still don’t quite understand the two-thirds comments (by Obama), ponder this. Progressives want the electoral system to be revolutionized. They are pushing changes like universal registration – which would automatically register anyone to vote who is on a government list – and “approval voting.”

"Approval voting" is "a single-winner voting method that allows voters to choose any number of candidates. The candidate chosen the most wins." In other words, it anti-democratically turns the refusal to make a choice into a single-choice result.

In what someone could turn into a great Saturday Night Live skit, Hanlon at Salon (HT Twitchy), offering what may be the most obviously false and hyserical excuse yet offered for Democrats' poor fall performance, contends that an entire generation — millennials, but apparently no one else — had its votes suppressed (bolds are mine):

Millennials aren’t apathetic: Their vote is suppressed
Voter ID laws target students and the young -- it's an active campaign to keep twentysomethings from the polls

... instead of rearticulating the old clichés about voter apathy—a topic that, at best, is more complicated than either “kids these days…” or “old folks just don’t speak to us”—we should consider the impact of voter suppression on young people.

The midterm election results were predictable in large part because of the widespread effort of states to pass “voter ID” laws that target women, minorities and, of course, young voters, all of whom are more likely to vote for Democrats. The 2013 Shelby County v. Holder Supreme Court decision lifted requirements for states with a recent history of race-based voter suppression to get Justice Department approval for voting law changes, which opened the doors for states like Texas and North Carolina (among others) to pass measures that restrict voter registration efforts, voting hours and forms of identification required to vote. In Texas, for example, a concealed handgun license is acceptable ID for voting, but a student ID is not. North Carolina does not accept student IDs either.

... while I don’t think demographic data ever tells the whole story, I do think that narratives about the apathy of young voters should be tempered with the recognition that young people are disproportionately poor relative to the national average, and young African-Americans and Latinos are disproportionately poor relative to young whites. If we know that voter suppression tactics target young people, poor people and minorities, why are we pretending like low voter turnout among millennials is simply a matter of apathy? Further, what justifies the assumption that all young voters fit this explicitly white-coded millennial stereotype?

... The unfortunate truth is that even people of privilege—educated, white, middle-class people—are struggling with economic precarity today. As an early millennial born in the ’80s who teaches late millennials born in the ’90s, I spend most of my work week with the sort of millennial who holds the world in the palm of her hand; and while I occasionally have my moments of doubt, I don’t see apathy here; I see young people juggling classes and jobs while working unpaid internships at the behest of older, white-collar professionals who turn around and scold them for not caring enough. As for the largely disenfranchised millennials who don’t factor into the national narrative about millennial existence: I’m more likely to meet them at the cash register than on campus. And that’s not apathy, either; that’s called working for a living.

"Working for a living" and "taking the time to vote" are apparently mutually exclusive exercises. Of course, Hanlon doesn't get into the mechanics of how such millennials are prevented from registering to vote or getting out to vote on Election Day, voting absentee, or voting early — because the problem doesn't exist.

Hanlon's definition of "recent" must be in the neighborhood of 45 years ago. As I understand it, the vast majority of jurisdictions affected by the Supreme Court's sensible Shelby decision have not had a whiff of a problem with anything resembling voter suppression since the mid- to late-1960s.

As noted earlier, the definition "voter suppression" in leftists' minds encompasses far more than proactively stopping someone from registering to vote or voting. It's a condition that will exist until they get what they consider to be an acceptable level of (leftist) voter turnout. Adams probably isn't far off when he writes that, "In the end, they’d probably want people to be able to vote sitting at home using their television remote controls over the course of two months."