The Drudge Report tipped readers Thursday night to the Washington Post’s fluffy Friday story on Hillary Clinton -- she "won't back down or go away" -- which turns out to be just another tired rehash of friends who find her so admirably dedicated to public service. What really rankled in Kent Babb’s story was how she was admired for surviving her Benghazi testimony – unlike the men who didn’t survive: 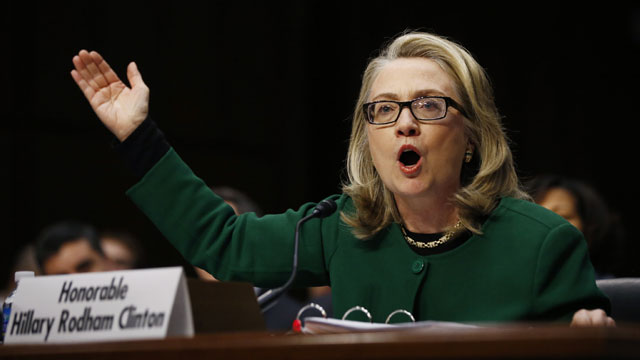 Clinton was grooving now, comfortable and in command, offering a tender version of herself in a place where no one would challenge her about her e-mail accounts, or the attack on the U.S. diplomatic compound in Benghazi, Libya, or the ugly political fights of the past four decades. Where no one would bring up the psychological Kevlar she wears into every room, the unyielding mind-set that has defined her since she was a child and still fuels her now.

Or as Clinton put it in a 2012 e-mail to a State Department colleague bracing to testify on Benghazi before the Senate Foreign Relations Committee: “Well, what doesn’t kill you, makes you stronger (as I have rationalized for years), so just survive and you’ll have triumphed.”

The rest was just a tired rerun of how Hillary triumphed over a bully named Suzy as a tyke, and how Hillary bravely went to Little Rock to be with her husband as her best friend cried, how she became a global human-rights icon at the U.N. Beijing summit in 1995, and how she had to survive the cruel impeachers in 1998:

Then, in 1998, two years into his second term, Bill Clinton admitted to having an affair with a White House intern named Monica Lewinsky. The scandal led to impeachment and to the spectacle of Hillary, who had once dismissed questions about her marriage by declaring that she wasn’t “some little woman standing by my man,” doing exactly that.

Although preserving her marriage confounded some feminists, Hillary’s approval rating soared to 67 percent in December 1998, the highest it has been before or since. Her husband survived impeachment, and Hillary survived public humiliation and endless speculation about whether she remained married out of love, ambition, or a combination of both.

Babb never said “Clinton admitted to having an affair after seven months of lying by both husband and wife,” and left out Hillary blaming a “vast right-wing conspiracy” for the president’s sexual messes. Once again, Hillary was simply a triumphant survivor.

Babb is best known for his liberal bias in the Sports section.