Former White House press secretary and Fox News host Dana Perino appeared on The Kelly File on Friday night to lament that she shared a touching story about President Bush visiting wounded soldiers in Washington with National Public Radio, but they edited out a family who was overjoyed to see the president, choosing to focus just on an angry mother who was mad at Bush.

“One of the reasons I wrote the book was because some of these stories about President Bush ... they don't get told enough," Perino explained.

Perino said that Bush visited a wounded Marine who had not opened his eyes since his Humvee was hit by an IED in Iraq.

PERINO: His mother and dad were there, his wife, his daughter and son were there, and the President is there. The family was overjoyed to see them. And that was interesting to me. I hadn't seen that before. It was my first visit with him to see wounded warriors. And as he asked the military aide to read the Purple Heart [commendation], we all stood attention and at the end of it, the little boy grabbed the President's jacket and he said, "what's the Purple Heart?"

Perino said that at that moment, she saw the soldier's eyes open. Bush ran to the side of the bed and pressed his forehead to the wounded warrior's. He asked the aide to read the Purple Heart commendation again to the Marine who had just woken up.

MEGYN KELLY: NPR comes out and says Dana Perino told many anecdotes in her wonderful interview. It's too bad we could not involve them all because of time constraints. And you and I – 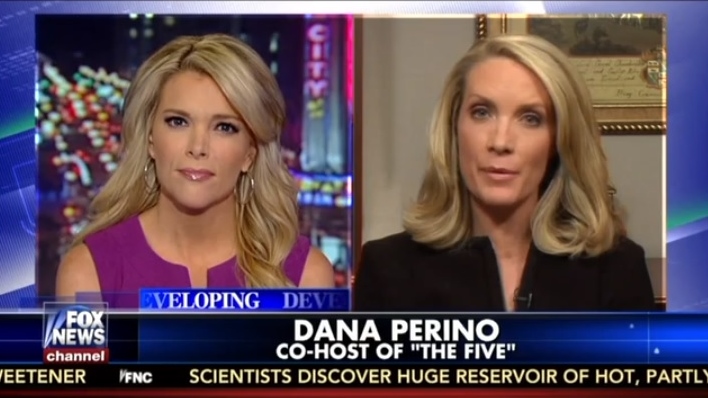 PERINO: Actually they didn't initially ask me about that part. When they asked me about the wounded warrior visit, the first question -- and I like [NPR host] David Greene, you know. The first question was about the mother who was upset and so I told him the whole story to make sure the full context was available.

KELLY: What's amazing is it's a beautiful story. It is a moving story. And just sitting here listening to it even though I've read it, you know, in your book, it still causes a physical reaction to think of what was happening at that moment, you wrote about the President's tears. And it just tells you something that they chose not to include it. It certainly wasn't because it wasn't moving. It wouldn't make people feel something. It's that they're wanting people to feel something else.

PERINO: Well, the Iraq war was controversial. And there is a mindset that thinks that the families all think that the sacrifice was not worth it. That's not what I experienced. When I watched, I would say 99 percent of the visits President Bush made to wounded warriors and there were many of them and their families off the fallen, they were grateful to the commander in chief, they understood that their son or daughter had volunteered to be in the military and that they wanted that sacrifice to be honored and he did that.

This is how the interview unfolded on NPR's Morning Edition on Thursday, with Greene insisting how incredibly controversial the Iraq war was, as if no one remembers it:

GREENE: But Dana Perino also reflected on the pressures she saw on her boss. President George W. Bush launched two wars - one in Afghanistan after 9/11 and one in Iraq that saw public support fall over time. Perino recounts going with the president to visit wounded troops at the old Walter Reed Army Medical Center.

PERINO: Most every family was just delighted that the president was there and so honored that the commander in chief would stop by. And I wasn't sure what it would be like. And on my first trip there, I witnessed that for about the first 25 people he visited.

And then, we went into this room and a mom and dad were there. And the mother was distraught. Her son was on life support. And from what I gathered, his prognosis was that it was unlikely he would survive. And the mother was very distraught. And she's crying, and the husband was trying to calm her. And the president was there, and he also tried to calm her. And then she yelled, you know, ‘Why are your children OK, but my son is here?’

And the president stopped trying to comfort her because she was inconsolable. But he didn't leave. He stood there almost as if he needed to absorb it and to understand it. Commanders in chief make really tough decisions. And we went on to the next rooms, and I remember those being experiences where the families were very happy to see him.

GREENE: Had that young man been in Iraq?

PERINO: I'm not sure if it was Iraq or Afghanistan. But certainly he had been fighting in the global war on terror.

GREENE: I mean, I'm interested in moments like that because, I mean, the president was leading a war in Iraq that was, you know, incredibly controversial in this country.

PERINO: Well, I think any commander in chief that asks his men and women in uniform to go on a mission and then that individual is harmed because of a decision that you have made - yes, of course.

The amazing part here should be that NPR granted a book interview to a Bush staffer who wasn't writing a Bush-trashing book. NPR's interview ended with a story that was positive about President Bush -- just not his policies. Perino explained how nice Bush was when her estranged father came to visit her at the White House.