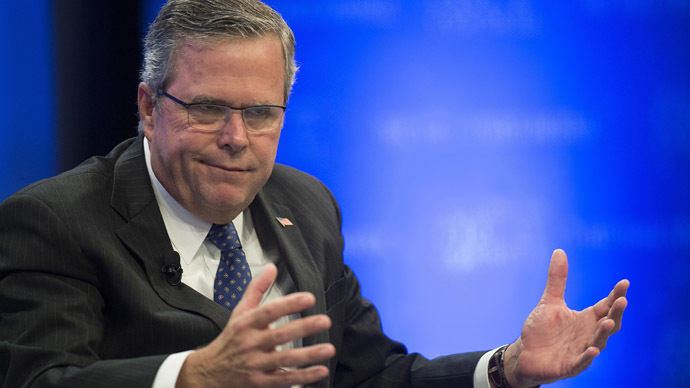 Jeb Bush is following in the footsteps of his father, who tried an “Annoy the Media, Vote Bush” slogan in the waning days of his last campaign. His brother George also confessed something like this when he was president.

Politico media writer Dylan Byers reported the quote came in a discussion about Family Research Council president Tony Perkins, who was quoted in the Times as saying that Christian conservatives should begin discussing which candidate to back as an alternative to Jeb, because he didn't represent their views.

"When you become the frontrunner and you're a well-known name and you've had the type of fundraising success that you've had, even though you haven't declared yet, you're going to be a target of The New York Times, which many on the right think is a badge of honor," Kilmeade told Bush.

Kilmeade later asked, "Would [Perkins] be somebody you'd approach. Would you say, Tony, you're misunderstanding me. We need to talk. I read that column today in The New York Times?"

"I'm not going to force you to do so," Kilmeade replied. "I'm just bringing it up."

It should be said that the Times was a major, throbbing thorn in George W. Bush's paw during his presidency. (Start with Joseph Wilson's "you lie" op-ed about his trip to Niger.) Bush told Fox anchor Brit Hume on September 22, 2003 that he only glanced at headlines, then let his aides summarize the media coverage, since journalists larded their stories with opinion.

It should also be said that perhaps Bush just doesn't like anyone in the media. He also expressed his annoyance at Fox News last October. Byers didn't report if that came up on the Kilmeade show.