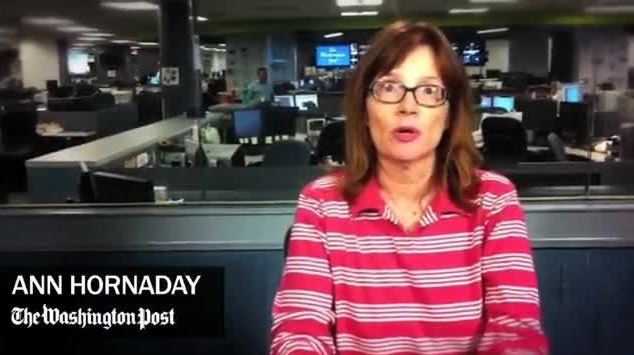 Liberal Washington Post movie critic Ann Hornaday is a you-had-me-at-Hello date when it comes to “climate change” documentaries. The latest is called Merchants of Doubt, comparing global-warming denial to denying cigarettes are bad for you.

Merchants of Doubt, a documentary by Robert Kenner, takes up where the 2006 global warming tutorial An Inconvenient Truth left off, probing the dubious annals of climate-change denial and the unholy alliance between corporations, partisan politics, pseudo-science and marketing that has given it traction despite clear scientific evidence and consensus.

The headline in the Weekend section on Friday was "Spinning out of control with a familiar formula." Hornaday reports the book was inspired by the book of the same name by Naomi Oreskes and Erik M. Conway. This means another Al Gore connection: He’s the first cheerleader for the book:

"Naomi Oreskes and Erik Conway have demonstrated what many of us have long suspected: that the 'debate' over the climate crisis--and many other environmental issues--was manufactured by the same people who brought you 'safe' cigarettes. Anyone concerned about the state of democracy in America should read this book."

Yes, the “state of democracy in America” stinks when one side doesn’t run over the other and squelch all debate. Back to Hornaday’s rave review:

Kenner traces the roots of their deception to the 1950s and early ’60s, when DDT manufacturers and the tobacco industry began pushing back their critics by falsely insisting that no consensus existed regarding the harmfulness of their products. With the help of such often-controversial public relations companies as Hill & Knowlton, these campaigns successfully passed as fact-based hard news, the invaluable “other side of the story” that an unquestioning press was eager to amplify in the name of fairness and balance.

It’s no surprise that, nearly half a century later, the playbook invented by Big Tobacco and perfected by food and chemical companies should be exploited by energy firms chary of government carbon regulation. But what’s disheartening about Merchants of Doubt is that the strategy still works so effectively, especially in a hyper-partisan, intellectually lazy, spin-addicted 24-7 news cycle.

Even more sobering is how tribal fealty trumps objective reality. Nowhere is that more evident than when a global warming denier, former U.S. congressman Bob Inglis of South Carolina, changes his mind, only to be faced with ignominy and the outrage of his fellow Republicans. When Merchants of Doubt isn’t making you mad, it makes you very simply, and overwhelmingly, sad.

In 2012, Hornaday gushed over the documentary The Island President about Mohamed Nasheed, former president of the Maldives, a chain of islands near India, who announced his people would be murdered by the West: “Whatever happens, even if we all die, we should not be angry with the people who murdered us. We can’t run climate change campaigns fueled by anger. I can’t tell the people [of the Maldives] that there are other countries trying to murder you. They’re trying to do good by their people according to their understanding.”

Hornaday introduced the murder quotes with this gush: “what emerges is still an impressive portrait of a charismatic, compelling leader punching far above his weight and managing to land a few blows.”